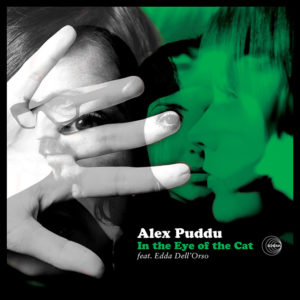 The title of this damn fine album In the Eye of the Cat is a reference to the Italian giallo film genre of the 1960s and 70s. These lurid murder mysteries/thrillers, featuring black gloved killers lurking in the dark, gorgeous young ladies being chased and artistic displays of blood and cruelty, usually had horrifying and imaginative film titles, in many cases with the words; eye(s), black, blood, death, killer and the name of an animal of some sort thrown in the mix. […] A nice homage to giallo maestro Dario Argento from fellow Roman Alex Puddu.

Alex is most certainly into giallo movies and the great scores for these wicked whodunits, but his inspiration goes further. Take for example the second composition on the album, “Emerald”; it starts out with a tense up-tempo beat that makes it easy to imagine a girl being followed in a giallo film, but then it turns into an African/Middle Eastern groove with bouzouki and zither! The North African influence on the percussion can be found throughout the album; it has that groovy, vibrant 70s vibe. The varied selection of instruments (organ, flute, moog, bongos, cello, violin, drums, bass, acoustic and electric guitars etc.) blend flawlessly into each other and make this an intense and inspired trip… in fact it may turn into a movie in front of your very eyes!

“The Bull” confronts you with some intense flute and a killer groove and here it’s easy to imagine a mob of armed gangsters robbing a bank in an Italian crime film/poliziottesco! “In the City of Gold” opens not unlike Nico Fidenco’s “Emanuelle in America”-theme. Alex has composed a great, catchy melody with Edda Dell’Orso on vocal. And if you keep seeing The Black Emanuelle (Laura Gemser) walking around half naked as a reporter with her camera, exploring cruelties around the world, when you listen to this one, then you’re certainly not the only one… Speaking about Edda, one is really full of admiration. The lovely lady is 80 years old and her voice is still full of passion. Her beautiful wordless singing can be found on three of the tracks on the vinyl (one more on the CD). Edda’s career goes back to the mid-60s. […] In the 1960s and 70s she was called “Morricone’s singer” but she also worked with other great Italian soundtrack composers, such as Bruno Nicolai, Piero Umiliani and Stelvio Cipriani. Not only on scores for westerns but also for thrillers, giallo, drama etc.

A living legend, Edda’s husband, the 84-year-old Giacomo Dell’Orso, is also participating on the album. He is credited for conducting and orchestrating the strings. He has worked as a composer and musical director/conductor since the 60s. And he’s a great piano player as well. Copenhagen witnessed that in 2013 when he performed live in concert for one night only together with Edda and Alex with band. The concert was held in celebration of the first album in Alex’s trilogy with Edda, Registrazioni al Buio (featuring both Edda & Giacomo), an album which has a great laid-back jazzy feel to it.

“In the Eye of the Cat” sounds like a natural progression, a great follow-up, and now we will be eagerly awaiting the third and final part which will surely be worth the wait!

LP:
A1 Danze delle Ombre in Algeria
A2 Emerald
A3 Il Sogno, la Luna
A4 Immersioni
A5 The City of Gold
B1 The Bull
B2 Mood Psychedelico
B3 Magic Mountain
B4 In the Eye of the Cat
B5 Una Donna allo Specchio