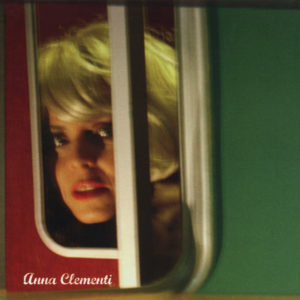 The following music projects were the outcome of a certain concept: escapism from the seriousness of contemporary music. And another one with a cabaret imprint, presenting music by Fred Buscaglione, Mina, John Cage and Enzo Jannacci. Afterwards Anna discovered the sound of Viennese scene and remained deeply impressed. Richard Dorfmeister e Rupert Huber selected her as vocal interpreter in the albums “Suzuki” and ”Delhi9” of the project known as Tosca. After came “Tre”, one of the best albums by the Italians Dining Rooms, on behalf of whom she wrote the wonderful “Dreamy Smiles”.

Today Anna Clementi continues to investigate vocal artistic performances, expanding her passion for singing, improvisation, word, gesture and theatre. The music she favours is contemporary, electronic, jazz, the ‘chanson’ tradition of Francois Hardy and Silvye Vartan, the intellectual music of Laurie Anderson, Anita O’Day’s jazz, Kraftwerk, and rock by Patti Smith. In Autumn 2005 she released “Love Is A Reason”, her debut album for the label Milano 2000. A recording produced by Thomas Stern, formerly partner of Einstürzende Neubauten, Meret Becker and Ulrike Haage.

“Love Is A Reason” is an album reflecting the various sides of Anna musical soul. The closest one to B 52’s pop (“Occasional Man”, the first single taken form the album), the one close to Mina cheeky and funny (“Tornerai”), the more electronic and cinematic one near to the European downbeat scene of Kruder & Dorfmeister, Cinematic Orchestra and Zero 7 (“Could Be”, “Stars” and “Swimming”) and another undefinible one, just like Anna’s true musical nature (“U Go To My Head”, “Rosso”).

all vocals by Anna Clementi, recorded at Lost in Space Studio, Berlin