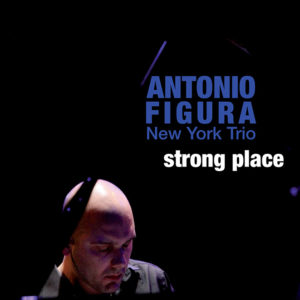 “Antonio knows how to exploit the dynamic qualities of the piano, and he honours the spaces between the notes. He’s achieved a truly timeless trio sound that really gives your imagination space to wander. His trio both play with empathy and unleash the fire when necessary, and the high production values on this record also make it a real aural treat”
Soweto Kinch

“Strong Place”, out in January 2010, features the Afro-American rhythm section of Herbie Hancock, one of the most famous in the New Yorker jazz scene, consisting of the drummer Kendrick Scott and the bassist Vicent Archer. The title of the album is an homage to Strong Place Cobble Hill, Brooklyn, where the he lived during the recording sessions of the album. All the compositions were written and arranged by Antonio Figura except for “Josephine” which brings the signature of Luciano Figura.