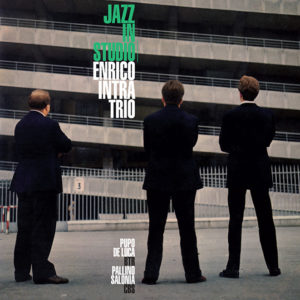 “This Record is the fruit of five months of hard work in the recording studio, rehearsals and even sacrifices” as told by Enrico Intra “and I am obviously satisfied with it. But I sure don’t want to consider it a goal. I feel like I’m going toward the right direction and I hope my next work is further confirmation of the effort, seriousness and true passion I’ve put into my music”. Those who know Enrico Intra remember his face like a baby always living in cloud-cuckoo-land, his behaviour sunny and lively with unpredictable reactions. As a result of this such aims could sound a little bit strange. But this time – and this record is the proof of it – the brilliant but even discontinuous career of the twenty seven years old Milanese pianist is really at a cross-roads. We started hearing about Enrico Intra seven year ago, during a jazz event at the Manzoni Theatre of Milan in November ‘55. On that occasion both the audience and the critics were completely engrossed with the big names, but suddenly they started showing real interest in the music of an unknown quintet playing behind the curtains between one show and another. The enigma was soon solved and the “X Quintet” – the name given to that “ghost band” – then came to the fore conquering a deserving ovation. It was guided by a callow young pianist who, using the “Shearing sound” then in fashion, dusted off a series of old songs surprisingly fresh and lively performed. Considering the poor music scene of that period he was fairly making a sensation, because his abilities of thrilling “swingman” were like a shot in the arm. The consecration of this new talented man did not take a long time, and during the second edition of the Sanremo festival in ‘57, in front of an international audience and critics, the trio was welcomed as the best performers. Unfortunately the sensational performance was not repeated again (and probably it would have been a hard act to follow anyway) during the following Sanremo edition.

Intra, who was then in the military service in Sardinia, used one of his permissions to play in the so called “city of flowers”, but he didn’t succeed in showing the same verve and communicational skills showed the previous year, the numerous ideas which ran through his music. Welcomed definitely into the bound circle of the most remarkable Italian jazz pianists, Enrico in the following years seemed to be unsure about which way to follow. He was probably plunged into the despair which hits those few Italian artists who don’t want to comply with the musical business demands. But this year he gained strength and he came back onto the jazz scene and everyone realized that they could not do without him. “Jazz In Studio” is the first long playing produced by him. His artistic maturity, tastes and leanings never before had been highlighted in such a way with the previous records. His emotional and soulful behaviour is best expressed here, especially because of the strong complicity with the other two components of the trio. Pupo De Luca, a really clever drummer and his true “partner” since ’57, and the twenty two year up-and-coming Paolo Solonia played an instrumental role in the recordings even without the support of the “lead guide”.

Seven out of the ten pieces have Intra’s signature, where his awareness as a composer-interpreter is inspired by and belongs to a typical jazzman. The performances – introduced by Enrico in person with short subtitles – are all really outstanding. My personal taste drives me to “Pittura”, “John Lewis” and “Classic Jazz”. The first one is an ingenious theme introduced by Intra during the ’57 edition of Sanremo with the title “The Classic in Jazz” and then reworked by himself with a pictoric influence. This is because during the last summer he met, in his club in Arenzano, the French painter Jean Paul Larufie. “John Lewis” renders homage to the leader of the “Modern Jazz Quartet” – who, together with Bill Evans and Miles Davis, is in Intra good books – where a certain kind of Lewis’ canons are proposed again using personal taste and expert stylization. “Classic Jazz”, which probably is the most beautiful piece, reveals Intra’s romantic heart, his inclination to that “sweetness” which is the other side of the coin of his lively personality.

LP:
A1 Percussion
A2 Nadis
A3 Pittura
A4 A Foggy Day
A5 Tra Bop
B1 John Lewis
B2 Classic Jazz
B3 You Stepped Out Of A Dream
B4 Tre, Tre, Tre
B5 Fiora Blues