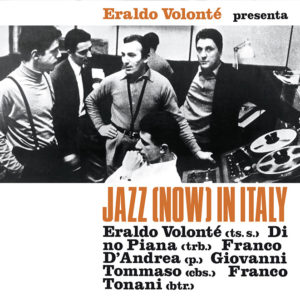 At the Jazz Festival which took place in Sanremo in March ’66, out of the seven bands present only one was Italian; that is of course if you exclude Guido Manusardi, an Italian pianist that has been living in Sweden for years. What I’m talking about is Franco D’Andrea’s piano trio with Giorgio Azzolini and Franco Tonani: an excellent trio that I think would have been able to obtain a bigger interest if Eraldo Volontè and Dino Piana had been added to these three excellent musicians. I say this for the simple reason that listening to this record, two or three days after the end of the festival, opened up a new view to me, so to speak. Italian jazz is a really strange thing. Basically it has never existed. From 1925 to now the number of good jazz records that have been made in Italy is only about 100, but nevertheless Italy has always had excellent musicians. To confirm what I have said, all you would need to do is listen to the latest record by Eraldo Volontè, Dino Piana, Franco D’Andrea, Giovanni Tommaso, and Franco Tonani, who are only five out of all of our greatest musicians.

Today, if it’s possible to count on a group of musicians in Italy, even if restricted, whose product is always one of high quality, it is mainly owed to them and a few others. If I’m not mistaken Eraldo Volontè has been active since 1946 or ’47 and has had the most varied experiences by following an evolution that went hand in hand with the evolution of jazz. But Volontè’s “suonar moderno”(modern play) has never been forced, and he is no longer the musician that must be à la page “at any cost”, because sooner or later it would come out in the open. Volontè is a musician of merit, that deeply “feels” jazz and has a style of his own. In fact I re-listened to a part of the records that Volontè has influenced since 1947 and today I discovered that there exists a foundation that he never moved away from during his evolution. There exists a man with a well defined personality.

The rhythmic D’Andrea, Tommaso, and Tonani seem to me to be probably the greatest musicians that Italian jazz can count on today. The third track on side one: “Tale” one of Volontè’s compositions, fully demonstrates this. The three tracks on side two: “Ornette”, “Explorable”, and “Mr. Arpo” dedicated to Arrigo Polillo, are performed in a quintet. In fact, Dino Piana joined in with Volontè, D’Andrea, Tommaso, and Tonani. Piana, as everyone knows, is a product of the radio. It was discovered, in fact, with the first edition of “Coppa del Jazz” (The Jazz Cup) and it was greatly merited to that transmission.

LP:
A1 Eclypso
A2 Flamingo
A3 Tale
B1 Ornette
B2 Explorable
B3 Mr. Arpo