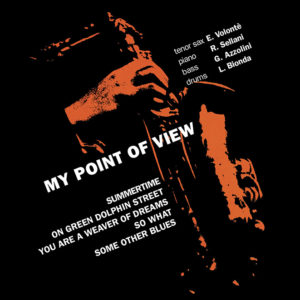 All the tracks, recorded- from May to November 1963- at Durium Studios, Milan are now released with liner notes by Arrigo Polillo

Eraldo Volonté is a veteran of italian jazz: he is one of those characters that are always seen wherever there is good jazz to play or listen to. With a difference from many pioneers, however, Volonté has never lost even a shred of his enthusiasm, even if he has been playing professionally for more than a quarter of a century and like almost all of is colleagues, in Italy, has had to adapt and be part of an infinite number of bands playing all types of music. His enthusiasm has kept him young, alive, very alert towards all that happens around him, and it has allowed him to continuously perfect himself, and to refresh his own stile : so much so that today this Milanese saxophone player can easily boast to still be one of the top musicians – that is one of the most modern, and most up to date – of italian jazz.

The activity of Eraldo Volonte is unambiguously linked to the experiments of that “ second generation of italian jazz ” established during the years which immediately followed the Second World War.
Born in Milan in 1922, he studied violin at the Conservatory and performed first with the Orchestra of Max Springher then with Ceragioli, Kramer, the “Orchestra del Momento” and many other names of the Italian music scene of the time.

It ‘s 1947-48 when a small but loyal elite began to take an interest and formalize through specialized magazines, the message, the techniques of expression and the scope of this new musical trend still uncommon in Italy.

On the first Jazz Festival in Italy in 1948, Volontè participated with Gilberto Cuppini and Giorgio Gaslini performing on the stage of the Handicrafts Exhibition in Florence and at the International Festival of Jazz in San Remo alongside artists like Buddy Collette and Bill Russo also directing his own quintet.

Careful listener and passionate philologist, Volontè quotes and makes his own the artistic and expressive techniques of the great masters overseas and puts the ‘immortal legacy of saxophonist John Coltrane in his own musical and artistic development, reconnecting the same elite that disappointed by provincialism and apparent inability to renewal of the Italian jazz of the postwar period was hopelessly turned to the most determined and innovative foreign names.

The artists who Volontè wanted with him to work on “My Point of View”, were the pianist Renato Sellani, double bass player Giorgio Azzolini and the young drummer Lionello Bionda, artists with whom Volontè had already had the opportunity to grow, evolve and experience of course.

“A Point of View” recorded in 1963, is one of the best works that summarize the research, the work and the thinking of Volontè and without which it would be impossible to understand an important step for those that were the Italian jazz influences and overseas in our country that led the experimentation to current developments.

LP:
A1 Summertime
A2 On Green Dolphin Street
A3 You Are a Weaver of Dreams
B1 So What
B2 Some Other Blues