Fabrizio Bosso began playing the trumpet when he was 5 years old. At 15 he was already graduated at the Conservatory G. Verdi in Turin. Cultivating his interest for classical music he approached to jazz music. A strong, persuasive call to which Bosso failed to react.

Technically flawless, what most strikes of Fabrizio is the creation of a personal handwriting, in which colour and sound dynamics are never predictable, the sense of swing is pushed to the extreme and the creative tension is constant in the interpretation of patterns.

In addition to his live activity under the direction of George Russel, Mike Gibbs, Kenny Wheeler, Dave Liebman, Carla Bley and Steve Coleman, Bosso was also recruited by Charlie Haden for some dates of the promotional tour of the Liberation Music Orchestra’s last album.

In 1999 he was voted as “Best New Talent” of Italian Jazz by a referendum of the “Jazz Music” magazine, and worked steadily over the years in the groups of Salvatore Bonafede, Giovanni Mazzarino and Enrico Pieranunzi.

The years 2007/2008 crown Fabrizio as one of the greatest Italian musicians.

At first the success in 2007 in what is considered his debut album as a leader for a major label, Blue Note / Emi Italy, “You’ve Changed”, made with his stable quartet and an orchestra of thirteen arches, the Bim String Orchestra, coordinated by the cellist Giuseppe Tortora and directed by Paolo Silvestri with the guests Diane Reeves and Sergio Cammariere. Then the participating in the success of “Trouble Shootin’” a good record of Stefano Di Battista with whom he made important tours in Europe.

In 2008 however, in addition to “Five Four Fun” of the High Five Quintet, Fabrizio released “Sol!” with the “Latin Mood” composed made up of Javier Girotto (co-leader), Natalio Mangalavite, Marco Siniscalco, and Luca Bulgarelli, Lorenzo Tucci, Bruno Marcozzi, and the special guest Raul Midòn. And in the same year, in the duo with Antonello Salis for the Parco della Musica Records he also published: “Stunt” (with which he won the TOP JAZZ 2009). He also participated in an unreleased project designed by Roberto Gatto and dedicated to progressive rock, he recorded for the Italian Live Jazz Series 2008 of La Casa del Jazz / L’Espresso and he’s also present in another project carried out in the same series, “Homage to Fabrizio De Andrè”.

In 2009, after an appearance as a special guest at Festival di Sanremo, (which he had already took part to with Sergio Cammariere) alongside the young emerging talent Simona Molinari, he participated in the project “About a Silent Way” by Maurizio Martusciello, with Francesco Bearzatti, Eivind Aarset and Aldo Vigorito, supplemented to the magazine “Jazz Music” to celebrate 40 years of the work of Miles Davies. He also released a record as a quartet, with Luca Mannutza, Luca Bulgarelli and Lorenzo Tucci for the series of Italian Jazz of “La Casa del Jazz” / L’Espresso, with guests like Roberto Cecchetto, Giuseppe Milici, Natalio Mangalavite, Bruno Marcozzi and with the extraordinary participation of Filippo Timi; and he also recorded an album for the Japanese market that will be soon released in Italy with Luca Mannutza, Lorenzo Tucci and Nicola Muresu and the special guests Marco Tamburini and Max Ionata, entitled “Black Spirit”.

In 2010 he participated in the wonderful project “Complete Comunion”, ideated by the Italian- French drummer Aldo Romano with Heri Texier and the formidable Geraldine Laurent. The CD was released in live version supplemented to “Jazz Music” and the studio version was published by the prestigious French label “Dreyfus”. In June 2010, thanks to the idea of ??the organizers of the “Festival di Bolzano”, the duo between him and Luciano Biondini was founded, instantly showing proof of success. In autumn 2010 they realized a small tour in Africa and during the 2011 they are taking a lot of concerts, with the aim of entering the studio soon. At the end of 2010 Fabrizio gave birth to a new trio with Alberto Marsico on Hammond organ and piano and Alessandro Minetto on drums. With them he recorded “Spiritual”, appreciated live in summer festivals and coming out soon. In late 2010 he also recorded the album “Libero” with his historical quartet and the guitarist Roberto Cecchetto, published by now only in Japan for “PONY CANYON”.

Again “Top Jazz 2010” winner as Best Jazz Trumpeter and again Sanremo in 2011, this time alongside Raphael Gualazzi who romps the Youth Category. In February 2011, he also took part to the first date of the duo with Rosario Bonaccorso, half of the quartet of the double bass player “Travel Notes”, with whom Bosso recorded an album that will be released in September for the “Parco Della Musica Records”. The narrative and musical world of Bonaccorso fits in a special way to Fabrizio, who participates with extraordinary intensity and naturalness. Another excellent partnership comes out in May, the one with pianist Nazzareno Carusi, with whom Fabrizio addresses to the fascinating worlds of composers such as Schumann and Schubert.

The second album by Latin Mood is coming out in the next months, with Schema Records.

On June 21st and 22nd 2011 Fabrizio recorded in London, at Air Studios, “Enchantment – The Spell” with the London Symphony Orchestra. The project is dedicated to the music of Nino Rota on the occasion of the centenary of his birth. Maestro Stefano Fonzi, who was also the creator of the project, conducted the orchestra and wrote the arrangements. With him the rhythmic of Lorenzo Tucci, Claudio Filippini at the Piano and Rosario Bonaccorso at the double Bass. 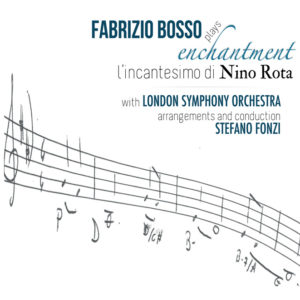 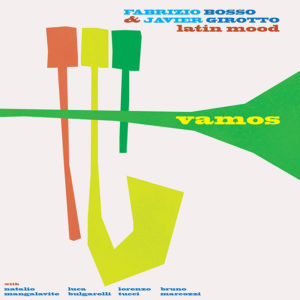