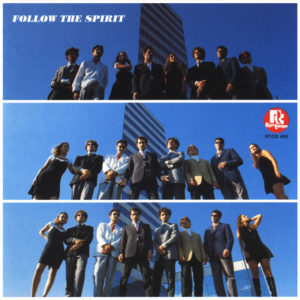 Whichever musical project you might be involved with, you won’t be able to leave out of consideration the important time of the inspiration. This is a gang of people sharing the same well definite objective: making their own music while respecting their ultimate creative urge. From this point of view, every reception this piece of work will get, all of us, the musicians and I, won’t be anything but satisfied. Thanks in fact to all of you who have grasped the meaning of our purpose and especially to those who have always believed in what Nicola and I could never, ever give up.

ABOUT THE TUNES
– – –
GOSPELITO is basically Latin in character, but it also has what I would call a church flavour. This has nothing to do with church music, but rather with some kind of religious song. On the solos, it moves from F 7 to Eb altered, with free harmonic interpolations by Marco Magno. Worth nothing is the Cubano feel during Fabio Accardi drum solo. Church music is also recalled in FOLLOW THE SPIRIT; it goes straight to the main force of the band musical concept- suspended and so called traditional chords are mutually supporting, a unique melody, with a simultaneous sense of freedom and attention.

GRACE OF LIBRA is my favourite tune of this set. It reminds me of those astral voyages of fellows such as Lonnie Liston Smith, Alice Coltrane, Pharoah Sanders. After Federico had cut his first take on his solo, he cane flying out of the recording booth, expressing sorrow for having been so free and unorthodox in using screams. He was still unconscious of having caught the right feel I was intentioned to give to the tune. Note Fabio Accardi’s accompaniment skills during the hypnotic statements of the theme.

SO TIRED, by Bobby Timmons, is, according to Nicola, one of the highlights of this album. Recorded by its composer in many occasions , it’s performed here in the same way Mr Timmons arranged it for a 1967 big band studio session, with some slight variations. Magno sounds undecided between laying’ the tune back and pushing it ahead with left hand and block chords-octave style, reminding the listener the late Bobby himself.

ZULU SWING gets its name from its rhythmical pace, both swinging and fierce. This cut is also an example of how easy it is to compose pretty melodies just playing an arpeggio on 7th/9th/11th/13th chords. While improvising on this one, we all tried to go straight to the heart of the harmonic dilemma, with some robust passages by Dammacco on baritone.

THE GIZMO is the boiler of this set, nevertheless it has some meditative elements by the players. Federico sinks his teeth into the groove, while a desperado Marco Magno points out that to be a funk band means you don’t need guitars; About me, those sentimental, Old Naples-style flatted 13ths were meant to work as a watershed between the other two solos.

The solar RA is named after the ancient Egyptian god of the sun; The theme is in a minor key, with a magnificent, open wide turnaround (conceived by the brilliant Mr. Magno) which resolves in the original, tranquil D minor. The aggressive, deeply blues-tinged solo of Federico and the Greg Osbyish inspiration of Gaetano are definitively further demonstrations of the real skills of these cats.

THE OPINION finds myself playing percussion alone, with the solid Mr. Piscitelli, in order to save the original Ramsey Lewisish taste of the tune; I’ve conceived this piece the way we played indeed, with that live commentary by the musicians. The choir gives the cui a cut meetin’ atmosphere, and finally we all dug that stuff. This was, obviously, my Opinion.

BLUES FOR ABRAHAM consists of a simple blues fine by Grant Green (Incidentally Coltrane wrote a theme in the early 60’s which was exactly similar). The Jazz-Bossa beat meets the essential funk-based horns, as Mr. Conte suggested during the session. On this one Federico leaps in on tenor, followed by me with an afro-cubop intermission and then by Marco Magno in some kind of Al Haig-Errol Garner vein. Marcello Piarulli digs out his essence of the tune on double bass and, on the tail, Claudio De Paola recalls the often underrated Sonny Red with his growling sense of rhythm.

HAMBA NAMI is a Cannonball Adderley tune recorded in 1968 with a big band support. Here it is arranged with voices playing the party of horns; Fabio and his fellows in the rhythm section keep the beat in the pocket, and the groove takes their composure in account. Then everything sparks out, with a brief chase on conga and bongo drums.

INNER SUNRISE was composed on the spur of the moment by four men left in the studio’s main room during a lunch time pause. With Nicola as conductor, Federico steams in on baritone, meanwhile Marco – on Hammond – get happy with some Jack McDuff-inspired phrases; Marcello and Fabio push out the groove, and everything gets tremendously funky

FREEDOM JAZZ DANCE brings the band in a joyously evocative mood. I’ve been used to sing it all the time, with Eddie Jefferson’s lyrics, so it was pretty natural for us to tape it. The result was a genuine, primitive soul performance with all the fellows in the studio being involved; I could see even Nicola Conte and Tommy Cavalieri moving in rhythm and being amused too. Finally: The symbol of this recording session is, I believe, the gorgeous solo of Mr Dammacco on Grace of Libra. You can hear in it all the tenors of modern jazz – Dex, Trane, Rollins, Shorter, Sanders, Henderson, Ayler, Mobley, with some spices of Bird thrown here and there. I am sure he reached the highest peak because he did follow the spirit, and that’s the right path for everyone, whether you are listener or a player.