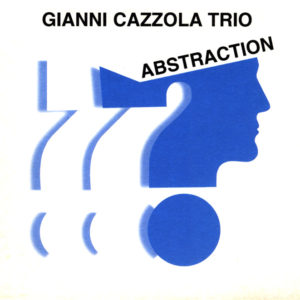 Gianni Cazzola confesses that he would have never expected that an one of his albums from the late sixties would be re-discovered and re-issued. Thirty years after its release people are again talking about “Abstraction”.

Recorded in November of 1969 in Milan, “Abstraction” is Gianni Cazzola’s first record as a leader, with Oscar Rocchi on the piano and composing and Cornelio Dattoli on the electric bass. The album was born from an idea developed in a jazz club in Milan.

For those that do not know Gianni Cazzola I must first point out that he started his experience with percussion at the age of nine beginning by playing with his brother’s drum set. Thereafter he began his studies at thirteen years old teaching himself through practice. Today he is a young sixty one year old who has experienced the full history of jazz in Italy playing with hundreds of musicians from the world over. Gianni is truly in love with jazz and the musicians that made and continue to play jazz and most of all, of course, he is in love with drummers as this is his job. His adoration for Art Blakey is proverbial, but as well for Elvin Jones and Philly Joe Jones. I personally remember, something that impressed me greatly in a positive manner, during a concert of Elvin Jones he sat on a corner of the stage so as not to miss even one beat, or in Siena as a guest for a concert, seeing his enthusiasm while giving technical explanations to a group of youth during jazz lessons.

To better understand Gianni Cazzola as a man I can add, as a personal witness, that he is very enthusiastic towards youth, in fact, his groups are almost always formed exclusively by people of younger generations than his (Marco Tamburini, Sandro Gibellini, Marcello Tonolo, Jacopo Jacopetti, Carlo Atti, etc… ). A style in the way of Art Blakey. But let’s get back to the album. The atmospheres in Abstraction are varied; starting smoothly with “Like someone in love” with Rocchi in evidence and Cazzola and Dattoli exchanging beautifully with the pianist, then moving to “Cancao do amanheçer” where the brazilian melody is filtered into the language of jazz. “Moment of joy” is a brief but intense piece composed by Oscar Rocchi who collaborates in the authoring of three selections of this album. With “A part of myself” Rocchi offers us a beautiful example of jazz composition, influenced certainly by Bill Evans, but also endowed with a matured personality. Rocchi, the pianist, is sensitive, his touch is like velvet and both Dattoli and Cazzola express themselves well showing that the trio is well blended and roaded, thanks to the fact that they had been playing together for some time. The Blues couldn’t be missing; in fact “F.B.M. blues” played in a medium-fast tempo, has a feel that could be perfect for an action film. “Ivory isle” is one from Mandini, during which the trio has the chance to express themselves well with a tight and interactive structure, with Rocchi well in evidence through the whole song, Cazzola’s cymbals work is brilliant and Dattoli is particularly effective in supporting them both. That said for “Ivory isle” goes as well for “Here’s that rainy day” by Johnny Burke. Here you can see, around the middle of the tune, a neat double time. Afterwards “Abstraction” by Rocchi, which also gives the title to the album, is a composition that is violent and tense from beginning to end with frequent changes in tempo. “I remember Coltrane” is a wonderful composition by Giancarlo Barigozzi with an elegant title, written by the sax player in remembering of one of the greatest Jazz saxophonist of all time, and offers Dattoli the opportunity to express himself in solos letting him show off in beautiful sound. A wonderful tribute to John Coltrane. And we arrive to “Speak low” that closes the album. Here we experience another tense composition, fast tempo, where the trio demonstrates once more a grand solidity of sound and measure as well as a grand feeling;we hear Cazzola as he incites his musicians.

In conclusion, “Abstraction” is a wonderful record, with a track list ethereal and well calibrated, which after thirty years shows few wrinkles and lots of freshness.

LP:
A1 Like Someone In Love
A2 Cançao Do Amanhecer
A3 Moment Of Joy
A4 A Part Of Myself
A5 F.B.M. Blues
B1 Ivory Isle
B2 Here's That Rainy Day
B3 Abstraction
B4 Remember Coltrane
B5 Speak Low