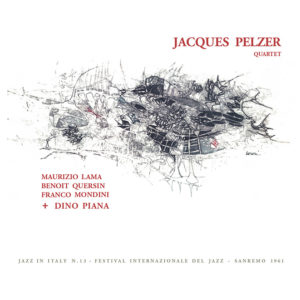 In every artistic field it is hard to understand how critically important first impressions are. I am talking about those quick and uncontrollable connections, like an electric shock, that originate from the direct proportion between the work of art standing before us (a picture, a poem, a piece of music) and our feelings. The critical judgement as such requires a deep meditation and the artistic work in question should be examined probably in the microscopic detail of the cultural tradition, filtered through the aesthetical parameters and controlled as a sort of X-ray, giving a careful analysis of every overtone and undertone, spontaneity and trick.

So I think it is right to say my first impression on listening to this record was skin-deep, on which the more meditative critics no doubt would respond correctly.

Listening to Pelzer, Piana, Quersin, Lama and Mondini I “found” in my mind this short conclusion: “Five white Europeans who play like five black Americans”. First of all I simply meant to underline that drive of emotivity, sincerity and expressive freedom which appears clearly in the ten pieces released on the “long play” of the Sanremo Festival. But above all I tried to resume unconsciously a certain kind of aesthetical aspiration that belongs to the European jazz and that often appears forcedly repressed. It is a habit and a “forma mentis” that our musicians, for obvious reasons, are rarely able to assimilate and put into practice with both a personal and natural language. A jazzy personality like Jacques Pelzer’s one has no confirmation in Europe: besides his remarkable flute and contralto soloist skill, originated from the most brilliant Parkerian tradition (it seems wrong to me to refer to Cannonball or Coltrane, as both are post-Parkerian too and on the same footing), we are amazed at Pelzer’s spontaneous freshness, at his elaborated yet easy phrasing, at his syntax which is linear but at the same time baroque, complicated and sophisticated, as well as the syntax of a poet inspired freely by Parker.

This is also true for the other musicians: Mondini (his style has always been likened to Clarke’s, but they never considered his long work and life process he has been following over the years). As for Benoit Quersin, a giant bass player who combined the classical grace typical of Percy Heat and the Chamber’s power (just look at the beautiful “Stork blues”, embellished with that flute-bass sound which is the source of strange suggestions typical of the musical purity of the eighteenth-century quartet!). Dino Piana, after he joined the Pelzer’s quartet, once again reveals his qualities as an intelligent, sensitive and modern musician, current enough to abandon for the first time his old “Californian” passions in order to concentrate on more original and stronger themes and to join a kind of beauty free from very limitated models.

Any musicians would understand perfectly the technical difficulties occurred in combining two clashing voices together like the trombone and the alto sax: to this end I would like to bring your attention to “Work Song” and the other two pieces where both Piana and Pelzer played in, as these creative sounds and solutions are the reasons for jazz research.
Maurizio Lama is a real “poulin”: he comes from the hot clubs and Sanremo, he entered into the “minefield” of big personalities effacing himself and coming into his own.
Let us judge him openly for his solos, his tasty and expressive intros and his vigorous rhythmic contributions: Lama meets the requirements. Then through this “long play” dedicated to the Sanremo Festival, the “Jazz in Italy” series celebrated its first happy year, as written by the critics whom I hope are sincere and rigorous.
This record represents a big ethical effort: to lead the way to the future. The recording was performed by Vittorio Paltrinieri at the Cetra studios in Milan in February 1961.

LP:
A1 Day By Day
A2 Baby
A3 Strictly Romantic
A4 Work Song
A5 It Might As Well Be Spring
B1 I Didn't Know What Time It Was
B2 Minority
B3 Just One Of Those Things
B4 I Should Care
B5 Stork Blues