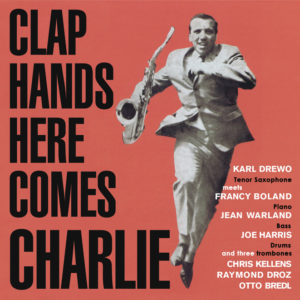 Clap Hands, here comes Charlie Drewo, the most famous of all the Viennese tenorists! – Well now, without exaggeration – Karl Drewo, 32 years of age – or Charlie as his American friends like to call him – is undoubtedly one of those rare specimen of European jazz talent. He plays as if he were born in the US and raised right in one of the darkest neighbourhoods of Harlem, possibly somewhere near the old Cotton Club where Duke Ellington used to excite his audiences for more than almost a quarter century. When you ask Karl what he likes in jazz, he’ll tell you: “I like jazz”. Period. As simple as that and without any nonsense and discrimination between the various styles and sub-styles of the subsequent jazz eras. Although he has some favourites among the great jazzmen, to Karl jazz itself is the one and only important thing in the world and he feels that a real connoisseur of jazz does not truly love jazz if he discriminates between the manners and mannerisms, because in essence there is only good and bad jazz – no matter what particular style. Karl’s all-embracing love of good jazz is delicately present in his own playing as has here been recorded. If you listen close enough you may be able to find straits and influences of many a great jazz artist in his playing although Karl has developed a musical conception entirely his own. And for that matter: even today, after almost fifty years of musical experience and development, you can detect King Oliver’s influence in Louis Armstrong’s trumpeting. Having been influenced by a master is a good thing and certainly nothing to be ashamed of.

The one eminent thing in jazz is, Karl believes, that a man swings, besides that everything else is of secondary importance. Of course a jazzman should be a skilled musician like Karl him self is. He should be devoted to his art and he should have imagination, taste and feeling. Only if he has these three properties he will be guided securely into and through interesting improvisations. All of these faculties and abilities, however, are wasted if the musician does not swing, and that means, that he has to be entirely absorbed by his music like Karl is. Is were both his dedication and his extremely interesting solo work which made him to soloist unanimously most applauded by critics and audience alike at the “VI Festival Internazionale del Jazz” 1961 in San Remo.

Karl Drewo, the kind family man who loves his wife Erika as he loves jazz, who spends his leisure time boat racing on the Rhine and filming whatever attracts his experienced cinematographic sense, who is for all that the driving jazz phenomenon that he is, was born in Austria’s lively capital Vienna: That explains much if not all: The people of Vienna are a wild mixture of Almost all kinds of human beings, some amalgamated, some still quite exotic: For instance, when you are sitting in one of those famous Viennese coffee-houses you’ll for sure hear several different languages spoken in your vicinity. You’ll meet countenances which seem to have come to life straight out of the Arabian Nights. The people in the flat next to yours bear one of the many unpronounceable Czech or Slovakian names which all look as if the vowels had been forgotten: In fact, Drewo’s own family is of Bohemian origin. In a melting pot of races and nationalities such as Vienna which has so much in common with the metropolis of jazz. New York , people are growing up to be considerate and sympathetic with each other. Besides, in Vienna you find much of the relaxation which is so typical for good jazz. In our time, I think, a city like old Vienna is bound to produce a couple of excellent jazzman: one good example is Karl Drewo, another one his old buddy long since bygone school days, Joe Zawinul, pianist and recent star at Birdland. Both studied music at the renowned Vienna Conservatory, both worked their way into jazz by playing on jam-sessions whenever one of their American idols payed a visit to their home-town.

I distinctly remember one session in the smoky cellar of an old coffee-house near the Royal Opera: Lionel Hampton was there and Frederich Gulda, the world-famous Beethovenpianist; there were Clifford Brown and Quincy Jones, too, and -last but not least- Karl Drewo. That night I heard him play for the first time as if he were already the excellent tenorist he has since become. In this and other sessions he developed his strong rhythmic feeling which is so beautifully noticeable in his rendering of George Duvivier’s “Foot Patting”. From those occasion stem is fluency – a good example here is “Young Bucks”- and his intricate harmonic and melodic ideas as a “Limehouse Blues” and “I’m getting Sentimental Over You”. One thing, however, which I admire in him now, he didn’t yet have then – I mean his hard, full and rough sound which makes all his music unmistakably Karl Drewo’s.

The group backing him on this disc was especially devised for the session by congenial Belgian composer-arranger-pianist Francy Boland who wrote all the arrangements and plays a marvelously boppish piano. It was his idea to provide the somewhat harsh tenor sound with an equally harsh sounding group backing of three trombones and rhythm. “Sentimental” is, I feel, a scarce masterpiece of such background arranging. Listen how softly and yet strongly the trombones lead the tenor along the melodic lines without ever interfering with the soloist’s ideas. On “Clap Hands” and again on “J.L.-K.” The abrupt ensemble chords break into the solo line only to drive the improvisation on unto yet another climax. “J.L.-K.” – originally written for the two tenor stars of the Kurt Edelhagen Orchestra, Jean Louis Chautemps and Karl Drewo – and “Young bucks” are Boland originals. The three horns are trombonists Otto Bredl and Raymond Droz – the first one German , the latter Swiss, and both members of the Edelhagen outfit – and Chris Kellens from Brussels on bass trombone. Besides Francy Boland at the piano, the rhythm section consists of Belgian bassist Jean Waeland and the well-known American drummer Joe Harris, since about two years a steady feature of the Berlin jazz scene where he occupies the percussion chair in the radio orchestra of Station SFB in Western Berlin. You’ll probably know him better as the man who swung the Gillespie orchestra in 1949 together with Chano Pozo and Quincy Jones’ big band in 1959-60. Karl Drewo himself is first tenor and featured soloist with the Kurt Edelhagen Orchestra which is the jazz outfit of the Cologne radio station WDR. Occasionally he is heard, too, in concerts with his own small group One of Karl’s standards in the Edelhagen book is “Clap Hands Here Comes Charlie” which is as well Karl’s homage to Count Basie and Lester Young whom he respects as the all-time master of his instrument. Therefore, it is even more surprising that Karl doesn’t show the least bit of servility to the style of his teacher and that is, I believe, the best argument in his favor: when a jazz musician does not copy the manners and sound of the master he admires. Especially in his work with Kenny Clarke’s and Francy Boland’s recording group – known as “Clarke, Boland & Co” – he has proved himself as a new master himself. This record, the first under his own name, should further establish him as a jazz musician who is becoming more and more – the one and only Karl Drewo.

LP:
A1 Young Bucks
A2 I'm Getting Sentimental Over You
A3 Clap Hands Here Comes Charlie
B1 Limehouse Blues
B2 Foot Pattin'
B3 J.L.K.