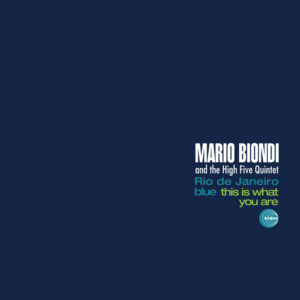 The love of Mario Biondi for Rhythm-and-Blues, Soul and Jazz, drove him to listen to music of a certain repertoire, which undoubtedly influenced his style (Earth Wind & Fire, Donny Hathaway. Billy Paul, Luther Vandross, Lou Rawls, Aretha Franklin, Eryka Badu, Will Dowing..). However what remains impressing his that his voice genuinely sounds like that of a consumed black, blues singer of 50 years old.

The first single taken from his forthcoming album “A Handful of Soul” features a quite interesting modern Samba in perfect Schema style, “Rio De Janeiro Blue” on Side A. It reveals Mario’s true soul of a crooner. In the past few years Mario collaborated with Alessandro Magnanini (Was-A-Bee), multi-faced musician as well as excellent arranger.

With Alessandro, Mario co-wrote two authentic gems “No Mercy For Me” and “This Is What You Are”, the latter was previously released as single and licensed on various compilations. “This Is What You Are” went on air in U.K. on heavy rotation in Norman Jay’s program Giant 45 for BBC London. Whereas in Italy it was programmed by RMC and later became the music to the network’s corporate TV commercial.