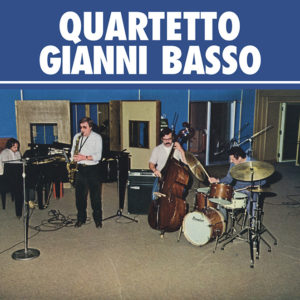 Gianni Basso represents one of the most solid institutions of the Italian jazz. He has been like this since the beginning, when he appeared in Milan after some years abroad. At that time he already had a long story behind him as an activist jazz musician: he started playing during his childhood in his hometown of Asti (where he was born in 1931) and then in Belgium, where his father emigrated with his family to work in the mines. It was there that he discovered the jazz music at its best.

At the beginning Gianni started playing the clarinet – he says – which helped him in learning, but then he substituted it with the tenor saxophone, his favourite-ever instrument. In those years the Belgian jazz musicians were streets ahead of ours, a fact that Basso realized when, ending up in Italy by chance, he found the jazz situation in our country disappointing. Jazz was then performed inside the unknown inner circles of enthusiasts, almost always in the order of jam sessions. A lot of water went under the bridge before the young saxophonist decided to move permanently to Italy: before that he played in Germany (even with the Kurt Edelhagen’s Orchestra), Holland, Switzerland and Poland. It does not seem too surprising the fact that these experiences allowed him to develop a type of jazz language which was very flowing and updated (a la Stan Getz, considered the best in those years, or influenced by other artists like Sonny Rollins, Zoot Sims, Al Cohn, etc.): a language that made a splash among the Milanese jazz lovers who where the first to have the opportunity to appreciate it.

Soon afterwards the long artistic sodality with another Piemontese jazzman started: the trumpeter Oscar Valdambrini.
To tell how many times the two played together is an hard task, in quintet or sextet line-ups (the “Sestetto Italiano” they formed in that period played an important role in the rather short Italian jazz history), and is also hard to keep count of the records the duo Basso-Valdambrini recorded under several labels, of the concerts and festivals they took part in. It is a fact that during the entire second half of the fifties and the best part of the sixties the couple Basso-Valdambrini represented a kind of symbol of the Italian jazz: the split between the two musicians displeased all the passionate lovers, when Valdambrini had to move to Rome for work reasons.

For years Basso has almost always played (in gigs, at least) with his own quartet: one of these quartets (we can identify it as the second last) achieved a great success at the Jazz Jamboree in Varsavia in 1979. For some time the rhythmic section, whom the Piemontese tenor saxophonist has been performing with in concerts, is composed of the three well-known soloists also playing in this record: the pianist Mario Rusca, the double-bass player Lucio Terzana and the drummer Giancarlo Pillot.

How do the fourths play? Basso does not want to pose as an avant-garde jazzman and believe too much in the chance of playing jazz with European overtones.
He does not believe in the intellectualistic experiments, and he bows before the innovators only when he finds himself in front of real musicians, of inventive but prepared creators. Bluffers, who are now in great numbers, are not well-liked by him. His opinions about jazz are the same as those declared by the most valued American jazzmen. Jazz is a language to be spoken only on condition that it has been deeply assimilated before, that it is felt like a language governed by precise rules and perfectly understood. It is a type of music that from an harmonic point of view should have all the necessary requisites, that should have swing and be expressed with the proper pronunciation.

And to make jazz – he thinks (and how can we blame him?) – is important to know one’s way around in the blues harmonies and standards; we are talking about those harmonies which are of great interest to him, because it is just through the way a jazz musician improvises on some standard harmonies (the ones belonging to Gershwin, or Kern, or Stevie Wonder, for example) is it possible to measure the talent and have a good command of the jazz language.

In this record, that certainly is one of the most recognised recorded by him up to now, Basso and his companions perform with three standards, but just one of these – the famous “Four Brothers” by Jimmy Giuffre which gave fame to the Woody Herman’s second band – is heard at jazz concerts. Rarely used by the jazzmen are instead themes such as “Stormy Weather”, a famous song of the thirties launched by the Cotton Club in Harlem, and “Cheek to Cheek” one of the most beautiful songs connected to Fred Astaire and Ginger Rogers’ musicals. The last three pieces are original, prepared on purpose by the members of the band that is. All the performances however are purely jazz orientated, as it often happens when Gianni Basso comes on stage.