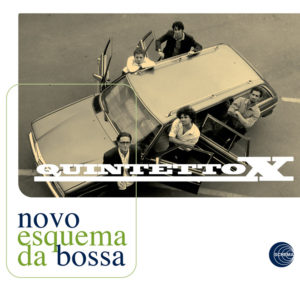 This time Schema Records would like to present you the re-mastered version of “Novo Esquema Da Bossa” of Quintetto X, previously released in the autumn of 1995. This version (apart for new cover art) contains also three tracks taken from the 12” – RTX201 “Balanca pema/Suono nuovo/Mentira” which have never been released on CD. With this single “Quintetto X” confirms their strong Italian jazz identity with an album that demonstrates a spontaneous yet well crafted fusion between Soul, Jazz and Brazilian Bossa.

“Quintetto X” is from Bari, which is on the edge of the “heel” in Italy. This land is a meeting point where energies gather shaping surroundings and emotions. “The Fez” cultural group has made these surroundings the settings for their creations. Comments taken from the linear notes of the album: “Novo Esquema Da Bossa “or else “New Bossa Outlook” is for us a movement, an attitude and a rhythm. It is the development of an idea that evolves from the appreciation of its own cultural distinctiveness. It is the southern light. It is contemporary music inspired from Afro- American, Brazilian and Italian jazz which slinks form the author’s song to the beat poetry. It is the tempo of modern music that creates its best art with delicacy. It favours spontaneity rather than perfection as well as creation as opposed to the final product. Rumbling cymbals clanging clanks on percussive beats of a drum: fusion version definition. Imagination, creativity, wonder, exploration and innovation. Jazz is a spontaneous invention. Its patterns exist to be excelled at and transcended beyond any kind of human dimension. These frames are in fact considered as “launching pads” towards totally undiscovered destination.

In “Novo Esquema da Bossa”, starting from the cover, inspired by both the Quartetto di Lucca and Sergio Mendes, it is easy to perceive the vibes of some intense longings which give body to a highly fervent musical attitude recognizable as being Italian. Here, in this playful musical game of modern Brazilian music, Italian flavors and jazz. It is not difficult to feel that Mina and Ornella Vanoni are the reference for “C’è più Samba” and “Senza Paura”, while Joyce and Edu Lobo are the source of inspiration for “Luce Del Sud”. On the other hand, “Jody Grind” is a soul-jazz classic by Horace Silver here arranged in the fashion of Sergio Mendes Brazil ’66 while keeping in mind the Mereilles & Copa 7’s version that, together with Eumir Deodato, created fantastic arrangements for both Ellis Regina or Marcos Valle whose lesson can be seen in “Meu Desespero”. “Esquema da Bossa” and “Ceu Azul” instead, openly reflect the style of Hermeto and Airto’s Quartetto Novo while, here and there, it is a joy to perceive a very effective Tamba Trio’s touch. Some intense reminiscence of Franco d’Andrea and Dom Salvador can be heard in Piero’s piano playing when, at the same time, some of these sounds, gently remind the absolutely dazzling style of the honourable 1971’s duo Cicci Santucci & Enzo Scoppa, as well recalling both Mandrake of the 75’s experience and Archie Shepp at any time.