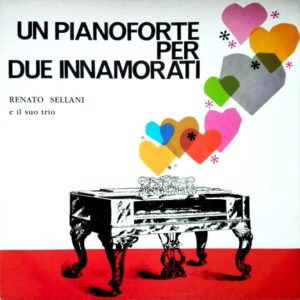 It often happens, that a registration of Jazz is organised with great enthusiasm, and this happens above all in Italy, where these records are only made for passion. It was exactly what happened with the registration of the passage of this LP. Eraldo Volontè, who’s enthusiasm increases every year, has called not only some of his most brilliant friends in Milan, but also two musicians who are living in Paris. The Roman drummer Franco Manzecchi, who is the last years has been most successful and is now one of the top Jazzmen in France and Benoit Charvet, bass. When in the streets of Paris the riots of spring revolution were still going on, they left France for Milan. to play Jazz with their Italian friends. This LP features “free Jazz”, some call it also the “new thing”. It is the kind of Jazz used by the black Jazzmen as a flag against the racialism. In Europe and naturally also in Italy this kind of Jazz has lost it’s political-social significance and has found it’s original harsh sound, which has an opposing value in it’s country of origin: “free Jazz” is lived only with an extremely stimulating and risking musical experience, in which the musicians are working very exposed, without having the possibility to cling on the life-belt, which in the traditional Jazz is represented by the ready-made phrases.

In this kind of Jazz, where the improvisation is everything, nobody has to suggest harmonical or traditional phrases, structures consolidated by the tradition, as it happens with the “other” Jazz. Here, also there are themes maybe of serial conception, which more than more than only a guidance, form, for whom is improvising, a challenge. They serve to converge the improvisations around certain nuclei, and certain poles of attraction, to determine a densing of certain atmospheres, to precipitate certain ideas. Someone has remembered us, concerning “free Jazz”, the manners of improvisation of the very first Jazzmen of Chicago, who didn’t meet each other during their musical dialogue, because every one was following a certain harmonical circle, but of which they were aware only vaguely and instinctively, also because they were able to feel the ideas of the other ones, and above all they cared more about human nature than music itself. In the new Jazz the play is naturally much more difficult and fine. To be able to express things, that have sense and which are understandable for the listener, it is necessary to build up an authentic and rich background.

These six musicians do have the background required and according to the results obtained with the registration in May 1968, they were, during those two days, particulary inspired. They started off from simple themes (all ideas of Eraldo Volontè) and got up to a real agreement and dialogue even across long improvised solos. All of them, Volontè, Valdambrini, Piana, Charvet, Azzolini, Manzecchi, prove with this LP to be exceptional musicians. It is also interesting to note, now they are at their ease in this, for them unusual atmosphere, even soloist, as Valdambrini and Piana, who have always performed a kind of Jazz much less reckless. The fact is that they accepted the challenge and were most successful in taking freely part of the dialogues and to make themselves perfectly understood, even using the most free and loose language of “free Jazz”.

LP:
A1 Like Someone In Love
A2 Cheek To Cheek
A3 Les Feuilles Mortes
A4 Di Giorno In Giorno
A5 Sulle Onde Del Danubio
A6 On The Green Delphine Street
B1 Misty
B2 Sonar
B3 Louisiana
B4 Soon
B5 Polvere Di Stelle
B6 Tres Palabras