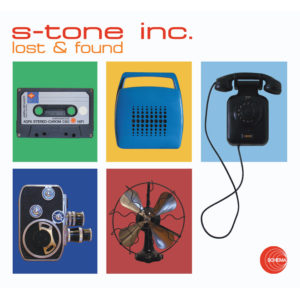 “Lost & Found” is the sixth album by S-Tone Inc., four years after the previous “Moon In Libra”.

As the title suggests, S-Tone Inc takes us into a journey through a collection of new and old unreleased tracks, part of whom were produced during the last ten years and for several reasons were not included in the previous releases.

Now, the “lost” tracks have been “found” and surprisingly still sound fresh and capture the real spirit of the best S-Tone Inc. productions.

The new tracks show a new direction, more moody and intense. These songs are the output of the sound exploration carried on by Stefano Tirone during the last two years, an exploration that brought him close to nw genres such as ambient rock and acoustic soul.

Downbeat grooves, electric guitars and dub basslines are the most distinctive elements of tracks like “Mass Distraction” and “Wise Up”, with a soulful mood that reminds and connects with S-Tone Inc’s past productions.

The album features some remixes, from the japanese dj Grooveman Spot, the Netherlands based team Combo Moderna (later on known as Solo Moderna) and Bedroom Rockers.

There are two covers, one of the classic tune “I Put A Spell On You”, of which we all remember Nina Simone’s version, and “Wise Up” by Aimee Mann, best known for being included in the motion picture soundtrack “Magnolia”.