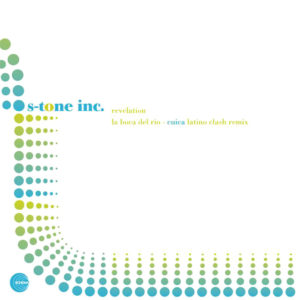 “Revelation” is a mature evolution of S-Tone Inc peculiar latin driven style, beatifully mellow goods in the nu-jazz vein with a touch of mediterranean attitude and a lush production. This track will be included in the forthcoming “Break’n’Bossa chapter 6”.

As B-side, a classic from S-Tone Inc., “La Boca Del Rio”, in a shining rework by latin beats master Cuica, whose album was out for Ubiquity last year. And the voyage of Schema into jazz is still on!!!

B1:
additional production by Cuica
original version appears on SCCD/LP 344 "Sobrenatural" and on the SCEP 377 12-inch EP