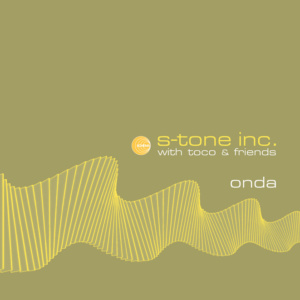 Eight long years have passed since the previous S-Tone Inc.’s full-length (“Moon in Libra”, SCCD/LP 407) and, even if Stefano Tirone hasn’t released anything under his popular pseudonym until Spring 2017, the longtime collaboration and friendship with Tomas Di Cunto (a.k.a. Toco) has never expired: Tirone in fact produced Toco’s “Memoria” in 2014 (SCCD/LP 467), and since then has never stopped working with Toco, who’s the co-author of 8 out 10 tracks of this release.

As anticipated by the “Superbacana” EP (SCEP 479), the sound of the new album is widely influenced by the Brazilian soul-funk sound of the late ‘70s known as Black Rio. But there’s more, starting from the opening “Sands of Time”, an up-tempo groovy track with a lyrical cello melody and Manuela Ravaglioli’s dreamy vocals, and the mellow disco flavor of “Vontade de viver”, sung by Toco. Manuela is another historical S-Tone-Inc. artistic partner, together with Laura Fedele, who sings in the soulful downtempo “I can’t keep up with your love”. Barro and Qinho, two emerging singers from the new Brazilian scene, respectively perform in “Vale do mistério”, a downtempo tune that borrows some guitars from the alternative rock scene and cites Pirandello’s “Uno, nessuno e centomila” in its lyrics, and in “Chuva de verão”, with Qinho crooning over a track deeply influenced by Isaac Hayes and Curtis Mayfield. The closing track, “Estrada real”, that features Luzia Dvorek on vocals, reminds of Sergio Mendes and Brazil 66 from the “Stillness” era, with its acoustic guitar-led groove and its silky flute performed by Carlo Nicita. The remaining tracks are three funky grooves from the “Superbacana” EP, featuring the Sao Paulo quartet of 4Maré, consisting of Toco, Luzia Dvorek, Bruno Morais and Kika.

Despite its various influences, “Onda” does not sound as a mere copy of what’s already been done at all: S-Tone Inc. took all the necessary time to produce a new record, and the result is a strongly original and personal effort!

LP:
A1 Sands of Time
A2 Vontade de Viver
A3 Luz da Joaca
A4 Vale do Mistério
A5 I Can’t Keep up with your Love
B1 Superbacana
B2 Zona Norte
B3 Chuva de Verão
B4 Zuzu
B5 Estrada Real