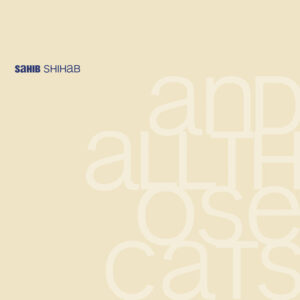 Sahib Shihab was, in many ways, the Thelonious Monk of the baritone saxophone. Like Monk, he was an uncompromising individualist with an idiosyncratic, often quirky, approach to improvisation. And, in fact, Shihab and Monk had a strong mutual affinity. They worked together in the late forties and early fifties and became good friends. Shihab admired Monk for his oblique approach to jazz and his resolute non-con- formity and he shared much of Monk’s musical philosphy.

Born in Savannah, Georgia, on June 23, 1925, Edmund Gregory, as he was known before he adopted the Muslim faith in 1946, began studying the alto saxophone at the age of 12, inspired by the work of Willie Smith in the Jimmie Lunceford orchestra.

He joined Luther Henderson’s band before he was 16 but left soon afterwards to enrol for a year at Boston Conservatory. He then had a two year spell with Fletcher Henderson and later worked with Roy Eldridge. It was after he heard Charlie Parker that Shihab’s music became strongly bop orientated.

He did his first record date with Thelonious Monk in November 947 and later he worked with Art Blakey, Tadd Dameron, Dizzy Gillespie, Oscar Pettiford, John Coltrane and Illinois Jacquet. It was in 1951 that he added baritone saxophone to his range of instruments.

When the opportunity came, in 1959, to join the band of Quincy Jones for a tour of Europe with the musical Free And Easy, Shihab accepted it with alacrity because he had become disullusioned with the politics and racism of the United States. And when the tour ended, Shihab decided to remain in Europe, settling in Copenhagen, where he taught at the Polytechnic High School and also composed music for the cinema, television and the theatre.

Shihab joined the Clarke-Boland Big Band in 1961 and remained a regular member of the ensemble untii it broke up in April 1972. He returned to the United States for a three-year spell in 1973, basing himself in Los Angeles, then moved back to Europe for a further period. In 1986 he went back once ag ain to America. He died in Tennessee on October 24, 1989.

The small group dates here were recorded between 1964 and 1970 and showcase the delighyfully eccentric, unorthodox improvisational style of Shihab on baritone saxophone and flute.

The opening number, “Set Up”, is a lively, up-tempo blues by Jimmy Woode whose theme is played in unison by Shihab on baritone and Sadi on vibes. The piece swings magnificently and underscores yet again what a great rhythm section the Clarke Boland band was blessed with.

Shihab’s ability to speak improvisational volumes on baritone with just one or two strategically placed notes is well in evidence – as it is throughout the album. The track is also notable for some enterprising solo work from Sadi and Boland and for Boland’s discreet comping.

“Peter’s Waltz”, an attractive minor key orginal which Shihab named after one of his sons, has an appealing harmonic structure and features more fine baritone work and a crisply articulated solo from Boland. Says Jimmy Woode, “I believe that thinking of his son really inspired Shihab on this date because he played at the top of his game”.

“Yah, Yah Blues”, another Shihab original, features what Woode terms “the junior choir” in a pseudo-scat vocal. Says Jimmy, “Gigi Campi was quite surprised when we all gladly agreed to join in the vocal. This tune was always an infectious crowd-pleaser when we performed it live – and we’d get the audience to sing along with us”.

Shihab’s flute and Sadi’s vibes play the theme in unison and, after the vocal chorus, there follow inspired solos by Sadi, Boland and Shihab. The piece is taken at a perfect, loping, walking tempo which is positively therapeutic.

“The End Of A Love Affair” has a kind of latin shuffle tempo with Sadi’s bongos augmenting Joe Harrisis percussion accompaniment. Shihab plays the theme on flute and after his fluent, inventive solo there is more fine piano from Boland. Then, after fours between Shihab’s flute and Clarke’s brushes, the theme is reprised.

According to Jimmy Woode, Francy Bola nd’s “Om Mani Padme Hum” is taken from a Tibetan prayer. He recalls: “It took a few run-throughs for the junior choir to get their chops in order – it’s not easy trying to chant and play at the same time – but when we recorded it we only needed one take. After that, though, the band was drained – so we had to get a course of restorative treatment at the bar!”.

Here Shihab is in exuberant mood, playing against a vigorous percussion background and making dramatic use of his speciai technique of combining voice and flute. Boland contributes an incisive, effervescent solo.

“Bohemia After Dark”, a classic original by bassist Oscar Pettiford which he first recorded back in August 1955, finds Shihab in exultant form on baritone. Jimmy Woode remembers: “Just before this session, Sahib received some undisclosed good news which kept him in ebullient mood the whole day. Whatever the news was, it certainly put him in a highly creative frame of mind – as this take shows”.

For the next four tracks, the group is augmented by the authoritative trombone of Àke Persson. “Campiis Idea”, by Shihab, opens in mournful, melancholy mood with Shihab investing the flute with a beautiful pastoral sound, backed by long notes from Persson. Boland then starts a vamp in 3/4 time and Shihab and Persson play a unison sequence. The tempo then switches to 5/4 for a muted solo by Persson, then Shihab follows, picking up the repeated phrase at the end of Persson’s outing and producing a solo full of Shihab trade marks. Boland solos next and then sets up the vamp again as Persson and Shihab join together in animated conversation until the fade-out ending.

Recalling the next track, Kenny Clarke’s “Jay Jay”, Jimmy Woode says: “This was also a one-take number. I distinctly remember klook dropping one of his sticks during this piece and deftly grabbing another without losing a beat. I defy any listener – drummers especially – to identify the point where it happened.” “Waltz For Seth” is named after another of Shihab’s sons. It’s a happy piece with the theme played in unison by Shihab and Persson. After a mellow and melodic bass interlude comes a rousing trombone solo from Persson, an inspired contribution from Boland and then the inimitable Shihab with that visceral, coarse-grained tone. Then Shihab and Persson take the tune out.

“Herr Fixit” is dedicated by Shihab to Jimmy Woode who was given the nickname by Lester Young during an overnight train trip from New York to Boston. lt seems that whenever Lester had a problem, Jimmy always managed to come up with a solution. Shihab knew of this sobriquet and decided to use it as the title of an original, which features Jimmy on bass. There is also a dextrous and sprightly flute solo from Shihab and another superb contribution from Persson who, as ever, displays great continuity of invention and impressive technical resource.

The next three tracks feature Shihab and Benny Bailey in a pianoless quartet. Bailey is in characteristically boisterous form, displaying formidable command of both trumpet and flugelhorn.

Bailey’s minor-key original, “Stoned Ghosts” was, he says, inspired by listening to some music written by Bela Bartok before he emigrated to the United States. “It was different from his later work,” Benny says, “and had bluesy, funky, romantic elements in it:” The piece has an infectious back-beat pulse and showcases the superb walking technique of Jimmy Woode.

“Companionship I & II” is not so much a two-part Shihab work as a false start followed by the complete version. The piece has a bossa nova beat and features Bailey on flugelhorn and Shihab on flute, playing with a limpid, floating sound.

“CT + CB” is dedicated by Benny Bailey to fellow trumpeter Clark Terry and to Bailey’s son, cornelius. It begins with alternate bars of 4/4 and 3/4 and then moves into straight 4/4 time. Kenny Clarke is especially prominent on this tracks, contributing some energetic fills behind his solid top cymbal beat.

Clarke’s drummng on all the sessions here is always sensitive and tasteful and enormously supportive of the s oloists. As Dizzy Gillespie once said:”Kenny Clarke was a master drummer. Hemade a huge contribution to music! Everything he did was in the right place”.

The last two tracks are Jimmy Woode originals. “Djdar Djar”, which Woode assures me means a little nonsense” in particular Indonesian dialect, is very much in the idiom of the distinctive Peggy Lee treatment of “Fever”. After a scat vocal by Woode and the statement of the theme by Shihab and Persson, there follow free-wheeling solos from the two horns.

“Talk Some Yak-Ee-Dak” means, again according to the composer, “talk bullshit”. It is a minor theme with a solid back beat and features Persson in eloquent form and Shihab playing dark and dirty on baritone.

This collection spotlights the consummate musicianship and individualty of Sahib Shihab and is testimony to his specialmusical gifts – not only as a top-rank flautist and baritone saxophone but also as a composer. Furthermor, it provides a welcomereminder of the high quality of the Clarke-Boland Big Band’s rhythm section, the lively style of vibraphonist Fats Sadi and the power and personality of two of the C-BBB’s horn-playig stalwarts, Benny Bailey and Ake Persson.