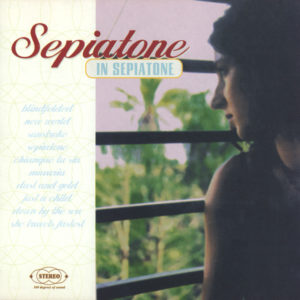 Sepiatone is the genre-hopping fusion of Sicilian writer and singer Marta Collica and Hugo Race, the Australian producer and instrumentalist previously heard and seen with the Berlin-based True Spirit and the legendary Bad Seeds. Their collaboration started following recording sessions of Marta’s previous outfit, the Italo-Australian group Micevice, for whom Race produced the 1999 release “Experiments on the Duration of Love”.

Now the duo have arrived with their debut CD, “In Sepiatone”, an inspired collection of ten tracks assembled from a diverse cast of original recordings, guest musicians and vintage vinyl samples. The overall effect is a merging of earthy, acoustic sounds with hallucenogenic soundscapes and memorable pop songwriting, a kind of lysergic Mediterranean mix of exotica and soul. If Marta’s vision stems from a deep immersion in latinic music and songwriting, Hugo’s feel originates from long association with the avant/post-rock underground and a kind of darkly evocative use of hypnotic loops and sound treatments.

Together, Sepiatone produce a chiaroscuro of light and shade where Marta’s cool vocals skate across rich fabrics of sound – as in the autumnal pop of “New World”, or the voodoo bossanova of “Mavaria”. But at the core of the Sepiatone effect sound lies a melancholic fatalism, based in the ironic use of softcore nostalgia, best exemplified in ballads like “Sepiatone” and “Down By the Sea (Immedea)”, where haunting vocals emerge and fade in an ocean of strings and classic pop production, creating a unique sound that is distinctly Sepiatone.

Riccardo Gerbino (percussion) and Giovanni Arena (contrabasse) from the Sicilian neo-traditional Dounia guest on several tracks with vital, acoustic syncopations. Michelangelo Russo (from the True Spirit) introduces the earthy presence of bass harmonica on the curious exotica of “She Travels Fastest”. The Sri Lankan multi-instrumentalist Robin Casinader guests on violin, as well as mandolin on the soulful “Just A Child”. Catanese guitarist Tomasso Marletta is guest sample programmer on “Blindfolded (Bendata)”, a high-speed fusion of flamenco and breakbeat.

In short, “In Sepiatone” is a multi-dimensional jewel of a record, where cinematic vision and high-calibre musicianship perfect a fusion of diverse musical streams. Collica and Race have furthermore collaborated with the Milan-based duo Dining Rooms (Stefano Ghittoni and Cesare Malfatti from La Crus), to produce two tracks featured on forthcoming Dining Rooms’ releases. Besides the trip hop-influenced “Chorus of Flames” (to be issued in diverse mix versions), the track “False Start” was released on video.