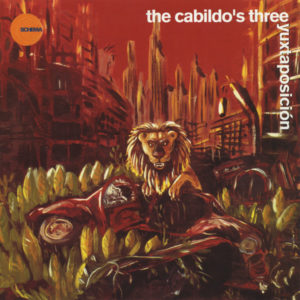 
“Yuxtaposición” is a recently unearthed treasure recorded by a tight Italian trio in Miami during the early seventies. Until now, this music has only been heard in office backgrounds, TV commercials and movie soundtracks. But the perseverance of an admirer brought about its first-ever release on the Italian Schema label. Imagine hearing a 1972-era Cal Tjader quartet without Cal Tjader and you get an idea of what to expect. It’s slightly Latin, lightly funky and truly enjoyable.

“Yuxtaposición” offers enough to interest a jazz listener. But the sounds heard in these 35 minutes are really better appreciated as mood music. Lead man, Cabildo, composer of all ten tunes here, has a knack for writing jazzy little hooks that launch his tasty, well-crafted keyboard solos. Often alternating Fender Rhodes and piano within the same song, his playing maintains a hypnotic command that recalls Bob James’ CTI style. Electric bassist Bobby Fares and percussionist Max Ronnie make subtle, supportive contributions that serve only to enhance Cabildo’s sound. There’s a funny thing about Yuxtaposición too. It’s kind of like developing an addiction. You may not pay much attention to it at first. But before you know it, you’re hooked. You need to hear it to be satisfied. A very nice surprise.

LP:
A1 Yuxtaposición
A2 Don't Put Me in the Shade
A3 Collection Samba
A4 Two Types of Complexion
A5 Hierro Forjado
B1 Jesus Maria District
B2 African Penta Song
B3 El Sonido Azul
B4 Castenada Drive
B5 Akorin