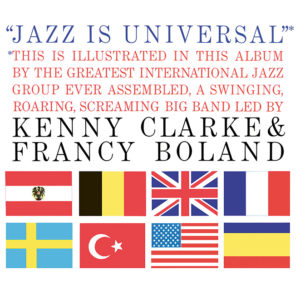 Once upon a time, the thirteen-striped flag spelled out home land to all jazz musicians. Things aren’t that exclusive anymore. Now the honour has to be shared with an entire collection of national pennants.
In this album, for instance, seven nations contributed talents to the gathering of jazz musicians in Cologne, Germany where the recording was made. The largest delegation, six members, came from the United States, including the co-leader and drummer, Kenny “Klook” Clarke, and the magnificent saxophonist, Zoot Sims. England sent two representatives; France, Belgium, Sweden, Turkey and Austria each supplied one participant to the happy occasion.
The thoroughly integrated sound that emerges from this band is convincing evidence that international boundaries have no meaning at all to the practicing jazz musician. Unless one is familiar with the individual playing styles, it would be impossible to identify the various nationalities of the musicians. The music they play is the kind of swinging jazz that can happen anywhere when the combination of musicians is right and the music is making it. The music was obviously making it when the Kenny Clarke-Francy Boland band assembled in Cologne.
The efforts of three individuals are largely responsible for this album; a dedicated Italian record producer, Gigi Campi, the incredible drummer, Kenny Clarke, and the Belgian composer, arranger and pianist, Francy Boland. However spontaneous the music may sound, it took a year and a half of planning to get the dates in line to make everything work out smoothly. Francy Boland spent the time writing the material and charting the arrangements. Gigi Campi maintained contact with everyone to be sure all would go well when the recording date arrived. Kenny Clarke’s preparations began a long time before the LP was ever conceived. When a group of young jazz revolutionaries spearheaded the bop movement back in the 40’s, Clarke was a major figure on the scene, showing the “new way” of jazz drumming. “Klook” is still spearheading the jazz scene, and throughout this LP he is an imperturbable force providing a bedrock foundation for solo and ensemble.
Bob Altshuler

Imagine the problems of getting the Clarke-Boland international band together:
It wasn’t easy. Only the leader of a strictly-for-kicks band knows how many excuses distinguished sidemen can find to miss a rehearsal. The first trembling eagerness to join the cadre can turn into cop-outs. Then the dependables get disgusted, and the leader spends more time on the phone than on the podium. “All right, if you’ve got a jingle date, crazy, but send a sub! There’s twelve guys sitting here waiting!”
Check the labels on this bag:
You phone three numbers in Paris to reach Kenny Clarke (U.S.A.), Roger Guerin (France), and Nat Peck (U.S.A.). Jimmy Deuchar (Eng¬land) has to come from London. Sahib Shihab (U.S.A.) is in a Swedish orchestra. Jimmy Woode (U.S.A.) is touring Scandinavia. Ake Persson (Sweden) and Benny Bailey (U.S.A.) are working in different bands in West Berlin. Zoot Sims (U.S.A.) is as always, just passing through. Only Francy Boland (Belgium), Ahmed Muvaffak Falay (Turkey), Derek Humble (England), and Carl Drevo (Austria) are in Cologne.
When the Original Dixieland Jazz Band went to London in 1919, they laid the foundation for a sori of musical Esperanto. Today the jazz language has become a lingua franca bypassing a score of spoken tongues, not to mention sectional prejudices and national passions. One of the hap¬pier aspects of this mission is the absence of conscious proselytizing: jazz, by its very existence, drew the world to itself.
The presence in the Clarke-Boland band of thirteen personalities from seven nations, playing in Germany for an Italian producer — and, now, being released for Americana by a Turkish impresario — is all the evidence anyone needs. As a matter of fact, I don’t need the evidence; at the Voice of America, I have the making of the world’s most representative stamp collection.
In fact, the beat evidence anyone could want is the swinging record inside this jacket. Listening to fit is like looking glumly in a mirror and seeing someone else, smiling.
Willis Conover

All the arrangements are by Francy Boland