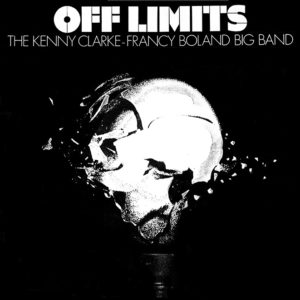 Myths take a long time dying, especially in jazz where the ability to confuse fact and fantasy has marked several generations of both critics and listeners. Perhaps the great Buddy Bolden could be heard for 14 miles on a clear night, but those who still believe that old one deserves to be interned in the same kind of institutions that housed Buddy in his latter days.

The European jazz musicians, despite years of recorded evidence stretching right back to the wonderful Django Reinhardt, is still considered by many who should now better to be inherently inferior to his American equivalent, whether white or black. This is one myth that seemingly refuses to die down, but organisations like the Kenny Clarke-Francy Boland Big Band hammer a few more nails into its coffin every time they go on stage or into a recording studio.

Francy Boland has painfully won his way into critical fashion to the point where most observers of the scene feel no qualms about liking him with the Duke Ellingtons and the Gil Evanses. The fact that a band made up of several nationalities, and including such greats as Kenny Clarke and Benny Bailey, has insisted on playing almost nothing but Boland music for more than a decade should be proof enough for all but the deal and certifiably insane. But, like I’ve said, myths die hard.

Perhaps the sudden arrival of this acclaim has had something to do with the subtle and radical change which has come over Boland’s composing and arranging in the last couple of years. As the world discovers the skills of the man from Namur as the keeper of all that’s good in the wonderful big band jazz tradition, he has quietly expanded his musical thinking on the stage where the existence of the CBBB as an instrument for his imaginations is virtually comparable to that of the Ellington, has done with his men.

Like Ellington and unlike, say, Gil Evans, Francy Boland has the advantage of having an orchestra to write for. In the decade of the CBBB’s existence, he has had time to weight up and balances the massive resources within the band and every track abounds with examples of his judgement. By now he knows exactly when to call on the phenomenal lead trumpet playing of Benny Bailey as in “Osaka Calling” and the incredible rock finale of “Exorcisme”; where Tony Coe’s remarkable clarinet will add that touch of piquancy to an arrangement, as on “Endosmose”; when to use the beautiful sound of the three trombone section as a carpet for the soloist, as he does behind Billy Mitchell’s tenor on “Exorcisme” ; when to call on the immense firepower of the two drummers, Klook and Kenny Clarke, as on “Sakara”. The examples are plentiful on these seven cuts. Those who have just caught up with the continuing progress of Francy Boland, composer and arranger extraordinaire, may have to adjust their sights for “Off Limits”. For here Boland shows that as well as being an arranger who cherishes and uses all that’s best in the glorious big band tradition, he has expanded his sphere of operations considerably.

The four tracks on the first side are on of the rare occasions when Boland has gone to other composers for his raw material. And just in case that myth rears its ugly head again, it’s worth pointing out that the four composers whose work he uses are all European – John Surman (Great Britain), Albert Mangelsdorff (Germany), and Jean Luc Ponty and Eddie Louiss (France).

John Surman’s “Winter Song” shows that this phenomenally talented young British saxist has sound composing abilities, too. Boland takes the opportunity for a romp on his electric piano, an instrument which more and more jazz pianists are finding increasingly attractive and intractable. Boland’s clean, crisp lines have a guitar-like quality. The other attractions of this track are the graceful solo by Art Farmer, Bailey’s muted trumpet, Sahib Shihab’s amplified soprano (another device which most practitioners find a bit difficult to control) and, finally, Tony Coe’s tenor.

“Astrorama” is by the gifted French violinist Jean Luc Ponty and is well spaced out in Boland’s arrangement, with ample room for several orbits by Dusko Gojkovic (trumpet), Shihab on soprano again, and Åke Persson’s trombone.

“Osaka Calling” was written by Albert Mangelsdorff, an occasional member of the Band, and is certainly one of Boland’s most fascinating arrangements to date. The muted, chattering trumpets make an eerie backdrop for the arranger’s piano and Tony Coe’s tenor before Benny Bailey does his oxygen mask act the end atop the ensemble.

Organist Eddie Louiss “Our Kind Of Sabi” permits Boland to unfurl the glories of his saxophone-soloists, which Ronnie Scott breaking out for a few furlongs in winning style.

The second side showcases three of the “new” France Boland’s compositions and emphasises that he is not a man to indulge rashly in radical re-thinking. Judged by his previous work, with the exception of the tantalising “Fellini 712” album, these exercises in “progressive” writing should have been tentative, “experimental” affairs. But, again, Boland’s exquisite control of the resources at his fingertips is overwhelmingly impressive. Perhaps Francy was ready to go to the musical barricades a long time ago, but he had to wait till his associates were ready to move with him. The way in which the Band, as a whole and as individual soloist, respond to the fresh challenges and new roles which these three compositions demand, prove that Boland has timed his campaign perfectly. As Klook said after the CBBB had shared a concert in Palermo with the Duke in July 1970: “I think, Francy, we are ready to something else”.

There is an added poignancy to “Endosmose”. The searing alto on this track was the last that Derek Humble recorded with the Band before his death on the 23rd of February 1971. Humble was one of the pillars which sustained the CBBB organisation in its earliest days and, thankfully, lived to enjoy the international acclaim which the Band was accorded after many years of struggle. The sessions, both in the studio and in public that Derek made in his last year showed that he was on the verge of becoming as great and individual a soloist as he was a section leader. Derek Humble’s musical epitaph was the unique sound he gave to the CBBB sax section. His was as great a loss to Boland as Johnny Hodges was to Ellington. A refusal to play safe and give the public what it wants has marked the works of the finest jazz musicians. “Off Limits” shows that the CBBB has broken through to another era in its unique progress. If it’s anything like the one that went before, we can only rub our hand in anticipation.

LP:
A1 Wintersong
A2 Astrorama
A3 Osaka Calling
A4 Our Kind Of Sabi
B1 Sakara
B2 Exorcisme
B3 Endosmose

All arrangements by Francy Boland