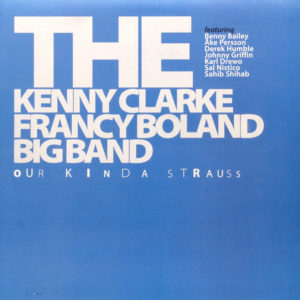 I believe that, once he’d got over the initial shock, Johann Strauss Jr. would have loved this album had he been alive today. It would surely have set his 173-year-old feet tapping. Because the Waltz King himself composed swinging music for people to dance to, just as the American bands of the swing era had people dancing to their music in the Thirties and Forties.

As Philippe Baudoin records in the Dictionnaire Du Jazz, Benny Carter was one of the first musicians to explore the jazz possibilities of 3/4 time when he recorded Waltzing The Blues in London in June 1936. Six years later, in March 1942, Fats Waller scored the first 3/4 jazz hit when he recorded Jitterbug Waltz. However it was not until the end of the 1950s that waltzes began to feature quite commonly in the repertoire of jazz musicians.

In March 1957, the Max Roach Quintet recorded an entire album of jazz waltzes, Jazz In 3/4 Time, for EmArcy. Among the compositions featured was a Sonny Rollins original, Valse Hot, which was also recorded by many other jazzmen, including Lee Konitz, Roy Hargrove, AM Takase and Rollins himself.

This album of waltzes by the Clarke-Boland band is a compilation of pieces from four different sessions, the first of which, in February 1966, produced the album Swing, Waltz, Swing. This LP was one of a series of recordings made by the Philips company, under the direction of label manager and jazz producer Siegfried Loch, to be sold with twen, the Cologne-based magazine for young people, published by Hans Hermann Koper.

Says C-BBB founder Gigi Campi: “I think iwen was the best magazine ever produced in Germany. It covered politics, music, sport, fashion – everything of interest to young people. Hans Hermann Koper was a fantastically creative guy who lived in a little square in front of the WDR radio station. We had a meeting with Hans Hermann and Siggi Loch and we agreed to release the Clarke-Boland album as a celebration of the 50th issue of twen”.

It was Kenny Clarke who came up with the idea of having the band record an album of waltzes. During a break in rehearsals one day, Kenny heard Karl Drewo warming up on Richard Strauss’s Rosenkavalier and he said to Gigi Campi,”Hey, Gyson, why don’t we do a record of our kinda Strauss?”.

And that is how twen came to release Swing, Waltz, Swing. The billing on the original cover was “Carl Drevo and die ClarkeBoland Big Band”, Gigi Camp! having decided that for the international community of C-BBB enthusiasts, “Carl Drevo” was to be preferred to “Karl Drewo”.

Drewo, a most accomplished saxophonist, was an appropriate choice as featured soloist on this album because he came from the Strauss city of Vienna, where he was born on May 17, 1929. After working in the bands of Charlie Gaudriot and Paul Reischmann in the late 1940s and early 1950s, he joined Gert Steffen’s band in 1951 and took part in the first Austrian bop recording session. He later played with Horst Winter’s band, with the Austrian All Stars and with Fatty George’s Two Sounds Band, along with Joe Zawinul.

From 1958 to 1972, Drewo was a member of the Kurt Edelhagen Orchestra and also worked together with Kenny Clarke, Francy Boland, Derek Humble and Jimmy Woode in the Golden Eight, which was the nucleus of what was to become the Clarke-Boland Big Band.

The ensemble featured on the Swing, Waltz, Swing album is actually the Clarke-Boland Not-Quite-So-Big Band, with four trumpets, two trombones, four reeds, three rhythm and Fats Sadi on vibes and percussion – but it has all the vital characteristics of the full-size unit.

This CD contains seven titles which have never been issued before.
Explains Campi: “In 1967 I reached an agreement with 15 European radio stations to provide recordings by the Clarke-Boland Big Band for a monthly half-hour programme over a oneyear period. This was a project that had never been done before and has not been done since – but I managed to get it together. This initiative produced six hours of material and I have been able to draw on some of it to compile this CD”.

One problem Campi faced when it came to commissioning jazz arrangements of the compositions of Johann Strauss, Richard Strauss and Franz Lehar was that Francy Boland declined to undertake the job.”That music is so beautiful, so perfect, that I cannot change it,” he told Campi. Some other arrangers also had misgivings about the idea. But then Campi phoned the Yugoslavian pianist/composer/arranger Bora Rokovic and he agreed to do the arrangements. This was the first and only time when the Clarke- Boland Band played music arranged by someone other than Francy Boland.

Bora Rokovic, from the town now known as Becskerek in Yugoslavia, where he was born on July 19,1925, had come to Germany in the 1950s and worked with a number of small groups before joining the Cologne-based orchestra of Kurt Edelhagen in 1962 as pianist and arranger. He remained with the orchestra until it disbanded in 1971. He then joined the Werner Muller dance band which evolved eventually into the WDR Big Band, with which he remained until his retirement.

Bora recalls: “I was excited about the idea of arranging these great waltzes. It took me about a week to do the four arrangements and they came together pretty spontaneously. I then thought it would be diplomatic to call the son of Richard Strauss to let him know that I had done a jazz arrangement of Rosenkavolier. He was not impressed. In fact, he was very angry and told me I had no right to tamper with his father’s music. I thought there might be problems when the record was released – but happily I heard no more about it”.

The session of January 14th, 1972, which produced tracks six and nine, was the very last to be recorded by the C-BBB alumni. Derek Humble, the brilliant lead alto player, had died almost a year earlier and Johnny Griffin had left – saying that with Humble gone, he no longer wanted to play with the band. Says Campi: “Griff was a tremendous fan of Derek – but then, who wasn’t?”.

Johann Strauss’s Fruhlingstimmen, introduced by Fats Sadi’s high-pitched vocal effects (right channel) and Shihab’s answering flute (left channel), is given a powerhouse opening by Rokovic, the band swinging hard with backing from Sadi’s bongos. The piece has a typically oblique baritone solo from Shihab, backed by some shouting trumpet lines, and there is some tasty work from Drewo before the fade ending.

George Gershwin, the centenary of whose birth was celebrated in September this year (1998), had a peerless gift for creating memorable melodies and composed some of the greatest popular song hits of the 1930s and 1940s. He wrote By Strauss in 1951 when it was featured in the Hollywood musical, An American In Paris. This is a characteristic Boland arrangement with the lead being passed from saxophones to muted trumpets to vibraphone and then piano.

On the dramatically slow Rosenkavalier, which has a most “modern” chord sequence for its time (1909), Drewo, in Websterian mode, plays at the peak of his form. But the outstanding contribution of the entire album is that of Derek Humble whose solos on Wives And Lovers, Nights In Warsaw and Peter’s Waltz are exemplary.

Lotus, which begins in 4/4 time and then switches to 6/8, features some rather eccentric scoring by Boland, fine solos by Shihab on soprano and by the English team of Coe (that pure-toned clarinet) and Scott (that keenly abrasive tenor). This track also features Francy Boland playing organ and managing to make it sound like a caliope.

And there is the bonus of a marvellous soli passage, written with Boland’s unique flair.

John Coltrane was one of the first to use the Rodgers & Hammerstein waltz, My Favourite Things, as a jazz vehicle when he recorded it in October 1960. This version has a superb baritone solo by Shihab and some exuberant high note work by Bailey.

Nights In Warsaw is a fast waltz arranged in classic Boland style and in addition to Humble’s outstanding work there are trumpet fireworks from Shake Keane and Benny Bailey and a guttural, anarchic contribution from Shihab’s baritone.

Lobsong is a long, languorous piece by Boland, who is again featured on organ. Bailey does some fairly impossible things on flugelhorn before contributing a haunting, mournful trumpet solo and, in between, there is a well-conceived, wistful passage by Herb Geller on English horn.

Greensleeves opens as a slow waltz and then moves into brisk 4/4 time with Bailey and Keane swapping eights before the piece switches back to slow waltz time.

Peter’s Waltz, the catchy original by Shihab, is one of the hitherto unissued tracks. Sometimes when you listen to tracks which have lain for years in the archives, you are prompted to say that perhaps they should have been allowed to remain unheard. But in this case, we have an undiscovered gem, with Humble, Griffin and Shihab all in effervescent form – reminding us of the tremendous solo strength the Clarke-Boland Band possessed. Note the irrepressible Shihab’s “Entry Of The Gladiators”-style ending.

Cara Fea has a tour-de-force solo by the extrovert, ebullient Ake Persson and he is also in great form, this time muted, on Night Lady, on which both Drewo and Boland solo well. The same three soloists light up Just Give Me Time while Schon ist die Welt has Karl Drewo in Johnny Griffin mode.The piece also has some powerful brass writing by Rokovic.

The final track, Keep On Keeping On, is an original by Jimmy Woode, who in addition to be a marvellously stalwart bassist is a gifted and original composer. Sal Nistico makes a rare appearance on record with the band and there are fine solos by Shihab on flute and Bailey on trumpet.

As well as being the name of a most distinguished musical family, Strauss is the German word for bouquet. Und was wir hier haben, ist ein herdicher, musikalischer Strauss voller farbenprachtiger Bluten.-

LP:
A1 Frühlingsstimmen
A2 By Strauss
A3 Kaiserwalzer
A4 Rosenkavalier
A5 Wives & Lovers
B1 Lotus
B2 My Favourite Things
B3 Night In Warsaw
B4 Greensleeves
C1 Peter's Waltz
C2 Cara Fea
C3 Night Lady
C4 Just Give Me Time
D1 Schön Ist Die Welt
D2 Keep On Keeping On
D3 Lobsang