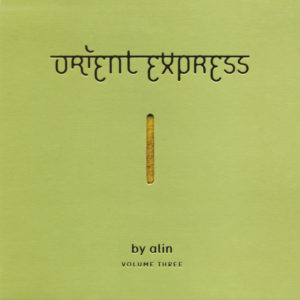 
Alin’s train called “Orient Express” calls in no station, as it is demonstrated by this volume, the third for the sake of precision, made to follow up the intense emotions stirred up with the first two collections. A new compilation that respects the oriental and dreaming chill out line toed so far, but that tends more and more to create veritable worlds to explore with one’s fantasy.

The third volume of “Orient Express” by Alin turns out to be more and more intriguing and exciting, the ideal soundtrack of a journey with eyes closed, a cocktail of music that Alin defines mental sound and philosophy sound, as if he want to rediscover and make vibrate the strings of the soul, often numbed by too much noise. A journey that widens in time touching new musical horizons in France and Spain, digging up marvels in Turkey and Lebanon, transporting perfumes from Egypt and then reaching Sri Lanka and India and finally touching the roof of the world with “Last Train To Lhasa”, directly from Tibet, un veritable daydream.

Very seldom can one listen to compilations that can get better and renovate with time. “Orient Express” does so very well. The engine of this dream train get more and more powerful and reliable and all we have to do is to anxiously wait its new journey. But, we already know that, it’s a pleasant wait, with an unforgettable soundtrack.