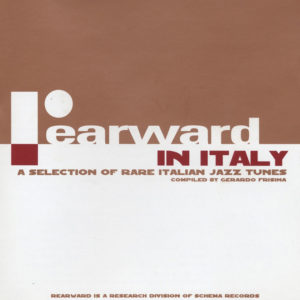 
It was a really great idea to search for pieces, with the taste of a collector, and to produce this compilation, with jazz pieces and pieces extracted from refined sound tracks which have a subtle and intelligent taste, among the production of some of the biggest Italian composers in this sector.

It is a piece that has never been reedited and it is of great taste, and consequent will to give works to an audience that otherwise are difficult to discover.  And therefore has taste for the cinema and the cadences and tempos that the soundtracks must have in order to support and sustain the films with their own contribution of pathos and atmosphere and that have a function of completion and complementation for films. These are among some of the reasons that they have lead to producing this album, but there is also jazz, by God, the type of tout-court jazz and the jazz that is filled with pieces extracted from sound tracks.

And now we come to the album’s contents.

The Amedeo Tommasi trio, with Jacques Peltzer as guest on the tenor sax, offers us Coltrane, dedicated to the great saxophonist who disappeared more that thirty years ago.  This piece has a great musical structure and the four musicians interact well amongst themselves, creating a nice tense atmosphere, following the foot steps of traditional jazz of that era with some very small experimental digressions. Monotonia is from the Basso-Valdambrini sextet: tense jazz, with Lionello Bionda on the percussion, and on the cymbals above all, and the two leaders that alternate the solos on tenor sax and trumpet, as well as presenting the theme in unison.  Good jazz from the early 1960’s. Kosmet by Dusko Goykovic is a haughty piece, with a nice harmony and solo instruments highlighted, from Dusko’s trumpet to Ben Thompson’s sax. I giovani d’oggi is a nice piece by Vito Tommaso that is well performed on the piano by Vito Tommaso himself. Helen’s Blues, from the sound track of the film Gli Arcangeli (The archangels), is  great blues, precisely by Sandro Brugnolini with the beautiful voice of Helen Merrill; slow at first and with a nice doubling of tempo with a style that is clearly jazz, and then halfway through the piece, brought back to a blues style with the persuasive voice of Helen. Amedeo Tommasi offers us a great version of Night in Tunisia, by Paparelli-Gillespie, performed in a trio with Maurizio Majorana on bass and Roberto Podio on the percussion. The pieces Big Noise and Just for fun are by the pianist and composer  of sound tracks, Piero Piccioni, extracted from the sound track of the film Tre notti d’amore (Three nights of love). In Big Noise the orchestra is directed by none other than Piccioni and well executes the performance of the theme and well supports the solos by the flautist Gino Marinacci. In Just for fun, again directed by Piccioni, the most articulated sounds come from Gino Marinacci’s flute and the tenor sax of the man who was hardly famous at that time, Gato Barbieri. Two great pieces taken from a sound track of very clear jazz style extraction, as is their creator. Lotar is from the Basso-Valdambrini quintet.  The tempo of this piece is tense like in Monotonia, and the work on the cymbals by Gianni Cazzola is incessant during the entire piece, and the musical theme is appreciated for its harmony and melody. Estate ’61 is a piece by the Lucca Quartet, rarified and atmospheric, full of a timbre search for that great sound, with Antonello Vannucchi on vibraphone and Giovanni Tommaso on counter bass who play like masters following in the tracks of a derivation of the white man’s jazz from California, with musical colors that are light and delicate. I quattro cantoni is a piece by Armando Trovajoli.  It is of a clear jazz matrix and it is performed by a small group and by an orchestra directed by it’s maker.  The tenor sax and guitar solos are highly appraised. Il cielo in una stanza by Gino Paoli and Estate by Bruno Martino are performed by the trombonist Dino Piana’s group and they have represented, and still represent today, a great contribution to the diffusion of music, most importantly jazz music, by Italian composers.

Dino Piana is the undisputed protagonist of these two pieces, well accompanied on piano by Renato Sellani and on percussion by Franco Tonani in Estate and Lino Liguori in Il cielo in una stanza, but it’s the color of the sound from his trombone that permeates throughout all of the music. Oscarnova is a piece performed by the storic Basso-Valdambrini quintet, with a bossanova rhythm, recollected by the title, and is dedicated to the trumpet player Oscar Valdambrini who expresses himself in a beautiful solo, followed by Gianni Basso on the tenor sax. The unison of the instruments in Prima visione of the Marc 4 made me go back in time, at least 25 years, to when this piece was the theme song of  the television program Prima visione (Prime time), which introduced the films that were soon to be released in the movie theaters.  I believe that it will be pleasing for mid aged people to listen to it again, and for  young people to discover “how we used to be”. Appassionatamente, from the New Jazz Society is a piece that reminds one of the Naples tradition arranged in jazz style from the 50’s at the climax of the bebop era. To conclude and restate the first part of this presentation we are faced with a great idea and a good album.  Enjoy.