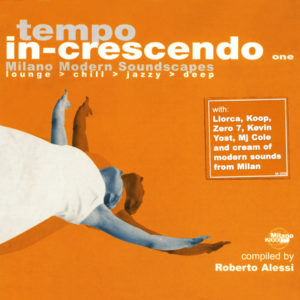 
“In-Crescendo Time” is a musical project thought as a journey where time passes slowly at the beginning, then widens in an imagery that depicts different soundscapes revealing themselves with the logic of a sequence. Time, reading key and decoding element of the compilation, explores spaces of soul, jazz and bossa, dissolving them in an electronic language. The gradually growing beat invites us at movement, and then dance generated by a deep, primitive and rational at the same time progression, rich of groove.

A compilation that tries to give a possible musical scenario of a late modern Milano, on edge between past and future ,between centre and suburbs. There, rough noir, electronic, and ethnic contaminations of milanese projects Noorda, Di Malta, Bedroom Rockers and S-Tone Inc. Converse ironically and wisely, in the shadow of the Central Station, with the different authors in the compilation coming from the rest of Europe.

From the English Zero 7, Les Hommes, Mj Cole and Kevin Yost to the German Glissando and Glenn Underground to the French-Japanese junction of the Mighty Bop who remix Silent Poets, up to the French, Agua Bassino, Llorca and the Greek Mikaël Delta and up again with the Swedish Koop. Milano as you like… a territory of a new sound border, in a world where borders are fading like the foam in a glass of champagne… or was it Malvasia?