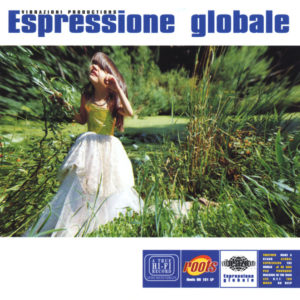 “Espressione Globale” was born from the necessity to express and summarize several different influences and musical styles in order to gather them up in a unique package, a kind of summary of 15 years of experiences in the music field by producer Fred Ventura. The key words that characterizes this project is “collaboration”, the 11 tunes map out a musical itinerary totally freed from any pressure or control by the record company. This, in great part, due to the contribution of musicians coming from different countries and backgrounds.

“Espressione Globale” is a melting-pot of rhythms and sounds passionately combined in order to create a modern sound that maintains a close link with the best tradition of song-writing. This album combines the talent of the vocalist Laura Piccinelli, from Milan, whose warm and suggestive voice has reminiscence of soul flavor without overindulging as often happens with Italian singers. Featured guest is also the established Italian vocalist Silvio Pozzoli. International guests are also present with the unmistakable “beatnick style” of Peter Sheeky; the spiritual voice of Denise Johnson from Primal Scream and a hip-hop attitude from Rapper Ale; from France, to make the project even more broad, Isabelle Aureglia.

The album finds its peaks with songs like “Together”, a folk-soul tune rapped in Italian, “The World”, a hypno-reggae tune with ambient influences, “Je ne sais pas pourqoui”, a bossa rhythm meets Eric Satie with French poetry, the Latin pop of “Life” and “Too Much”, and a cover version of “Walking in the rain” by the Australians Flash and the Pain, revisited in hip-hop stlyle.