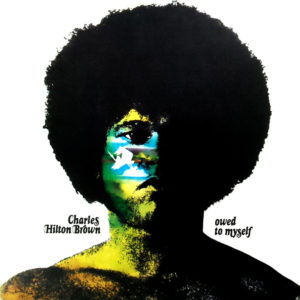 
Thanks to this re-press on Schema Records, is now available also in Compact Disc a rare album of Charles Hilton Brown. Entitled “Owed to Myself”, it has been recorded in 1974 during Charles’ stay in Italy. As himself describes in the liner notes: “I met Assagai in London, while on a tour, and there it was decided that Assagai would become a part of Charles Hilton Brown, vice or verses, that’s why this album, whose real nature comes from Africa, exploit in an unique Soul, Funk/Rock sound”.

First track of the album is the famous “Try a little Tenderness” of Otis Redding; we find also an elegant version of “Ain’t No Sunshine” of B. Whiters, but the real surprise are the tracks composed by Charles himself, full of energy and completely to be discovered. We have identified G.R.F. as the explosive track, the most “appetising” for Afro/Funk DJs. A swirling blend of soul, funk, and jazzy grooves — and a super-rare album that we’ve never seen in the original!

Supposedly, backing on the record is by the British Afro Funk group Assagai — which sounds right to us, because there’s a nice rolling conga groove on many of the tracks. Lead vocals are by Charles Hilton Brown, in a nicely raw soul style that reminds us a bit of Otis Redding, and a bit of Mike James Kirkland on some of his early 70s material. The record features vocal covers of a number of soul hits — like “Try A Little Tenderness”, “Love Train”, and “Ain’t No Sunshine” — plus some originals that are even better, like the funky instrumental “GRF”, and the tunes “Maddox” and “Tell Me Once Again”. Nice and raw, and with a sound hip enough to match the record’s cover!

LP:
A1 Try A Little Tenderness
A2 I'm Coming Home
A3 Tell Me Once Again
A4 Maddox
B1 Love Train
B2 G.R.E
B3 Ain't No Sunshine
B4 Argument's