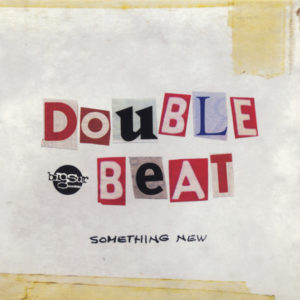 Their motto keeps being, “Funk is the key”. You bet they have become locksmiths of it by now. “Something New” is their 2nd album coming to life two and a half years later their debut and it does present some novelty if compared to “International Funk Music”.

“The Message” is a slow funk that could be interpreted as: ‘wait and see what we got ready for you..’.

In fact the second track entitles the album; “Something New” is an up-tempo Funk ride resembling a 70’s movie chase-up. Fast, funky, with an infectious organ riff. Double Beat remain linked to the Old School of Funk but the stance they want to make in this second work is immediately perceptible in a more evident use of electronic sounds and equipment. A contemporary interpretation of contaminated Funk.

So the album slides to the mid-tempo “Profondo”, somewhat inspired by a deep-house feeling yet in between dub and Afro-beat echoes, the latter resounding in the back-ground rhythm.

“Hot Jazzy Temper” is a very groovy tune, which does not flow unnoticed courtesy of the very skilful construction of its samples. Particularly catchy are the keys but the real surprise lays in the percussions samples, looped to art. A track that is certainly perfect for a hot and sweaty dance-floor.

“Wrap Your Troubles in Drums” is perhaps the most ‘rock’ amongst these funky themes contained in the album. That is until the track is entered by a unexpected ‘vibraphone incursion’.

“Africa 70” is another club-twister that whilst paying homage to 70’s Afro-beat in the meantime fuses in it electronic elements. Respect is due to the old school of Fela Kuti but the approach is certainly contemporary.

“Beat It” is a mid-tempo funky-house track led by an exotic flavoured guitar, with soft Latin accents in percussions and chant. The plot of the album thickens towards the end.

“Black Eyes” is another amazing club-track, presenting marked Jazz elements in the rhythmic parts as well as Latin and Afro ones. The voice scatting with the guitar theme form a spot-on duet.

The second last track “Flowers” is an electro-funky theme; speedy and a little furious, it resembles almost forgotten Break-Beats. Again the choice of samples here is worth a pleasant listen.

Another switch, as the album ends in a completely different mood: the final track “The War Is Over” is a more meditative slow combination of loops, where the pace is marked by orchestral strings, striking regularly as in a march. The feeling of a return march is persistent in the whole track that sounds quite cinematic.

“Something New” is an album of funky electronic themes by Stefano Ghittoni from The Dining Rooms and Marco Rigamonti. It is worth having it for the stunning way it maintains the groove persistent throughout its whole duration. DJs and ‘funkateers’ will appreciate it.