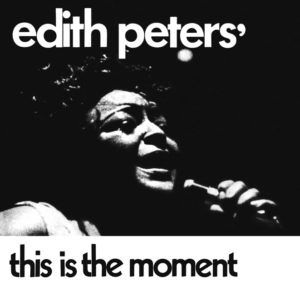 A quite unknown artist, Edith Peters was active between the 50s and 70s, singing as a member of the Peters Sisters, and as an actress; after marrying her Italian agent in 1958, she moved to Italy where she starred in several movies, TV series and ads.

In 1973 Sante Palumbo wrote and arranged a couple of songs for Edith Peters, perhaps with the aim of promoting her solo career. It was the same he released “Sway”, which was destined to become a cult LP. “This Is the Moment” was originally released as the B-side of “Lord Please Hear my Prayer”, a rare 45 published by Cipiti Records. On Cipiti she had already released her rendition of “Speak Softly, Love”, a theme from “The Godfather” soundtrack, though her career was at that time orientated more toward her activity as a TV and movie actress. And when the single was released, it was rapidly overshadowed by more important releases like “The Dark Side Of The Moon” by Pink Floyd.

And it is a shame, since “This Is the Moment”, written by Tony Benn Feghaly (erroneously credited as ‘T. B. Feghall’ in the original release) and Sante Palumbo, is an amazing gospel-soul song. In only two minutes and a half The Sante Palumbo Orchestra accompanies Peters’ entrancing voice, delivering a groovy and intense interpretation – a richness that requires multiple listen to grasp all the nuances of this stunningly orchestrated piece.

The original 1973 version of the song is here featured as a B-side, while Gerardo Frisina signs the A-side of this reissue with a rework of the track – doubling the length and adding his signature rhythm patterns.

“This Is the Moment” written by Tony Benn Feghaly and Sante Palumbo.
Arrangements and orchestra: Sante Palumbo
Vocal by Edith Peters
Originally released as CPT NP 1023 on CiPiTi Records