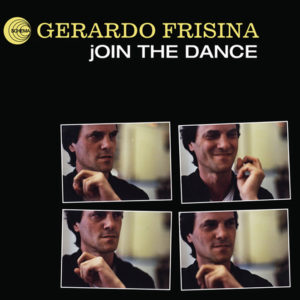 After the great success gained with his last productions and the numerous dj sets around Europe, dj and producer Gerardo Frisina presents his new album titled “Join The Dance”, follow up to “Note Book”, the acclaimed 2007 album featuring both unreleased tracks and the most significant remixes of the last several years.

From the title of this album, one might immediately assume that this is a release aimed at the dancefloor. This however, is not strictly an invitation to dance. This is a proposal to come together and celebrate the instinctive movement that is inspired by listening, and responding to music. Simply put, this is a jazz album, but still containing the strong afro-cuban influences that are distinctive to all Gerardo Frisina productions. With this album, he has also experimented with new sounds and influences, such as the track “Mille e una Notte”, which has an Asian inspiration. Gerardo has also made 2 songs in 3/4 time, “Waltz for Emily”, and “Another Waltz”. Two of the tracks are vocal tracks. The first of these, “Will you Walk a Little Faster?”, is sung by British Jazz Legend, Norma Winstone, a cover of the beautiful 1971 Neil Ardley track, the lyrics of which are taken from Lewis Caroll’s “Alice in Wonderland”. The other vocal track, “I’m Gonna Go Fishin’”, is sung by Francesca Sortino, well-known Italian singer who has collaborated with several national and international jazz artists. There is also a cover of a jazz tune from the 1959 film “Anatomy of a Murder”, written by Duke Ellington and Peggy Lee. The third cover is “Titoro”, written by Billy Taylor in 1958. “For My Mother”, dedicated to the memory of Gerardo’s mother, was first released on the 10” EP, Samba Skindim.

Thanks to the international promotion of the single “Will you Walk a Little Faster?”, previewed on Gilles Peterson’s Worldwide programme (BBC Radio 1), “Join the Dance” will bring back on the European club scene one of the most valued Latin jazz beat producers. The track “Will You Walk A Little Faster” is also released in faster club version, as a 12″ single (SCEP 453)