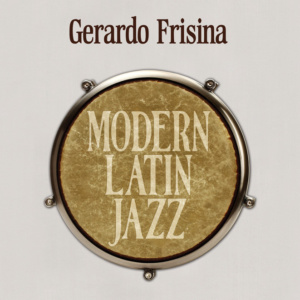 Gerardo Frisina is one of the main artists in the Latin jazz and electronic music scene on an international level; historically bound to Ishtar Edizioni since the beginning, many of his tracks have only been released on 10 and 12-inch vinyl. His latest LP’s, the “Olympia” 5-track EP (SCEP 475, Autumn 2015) and “Blue Latin” (SCLP 477, Spring 2017) make no exception in this case: many have asked for a CD release, which is now finally made available.

But “Modern Latin Jazz” is far more than a simple reproduction of the two titles above: first, it’s a 2-CD set, for a total of two and a half hours of music that has never seen the light in this format. Some tracks, coming from several EP’s, some of which are now difficult to find, have also been reworked to make this career-spanning product a sense of homogeneity. In addition, this collection is completed by four bonus tracks, songs that were still unreleased coming from the “Blue Latin” sessions. The musical coordinates of “Modern Latin Jazz” are virtually identified by the title itself: a jazz basic structure mainly contaminated by Afro, Cuban and Brazilian influences, all transposed into a present-day dance floor context.

For those who already know the artist, this release is essential as it combines new compositions with other ones that never appeared on CD before; for all the others, “Modern Latin Jazz” is among the best we can hear today in this area and therefore a more than perfect introduction to these sounds!