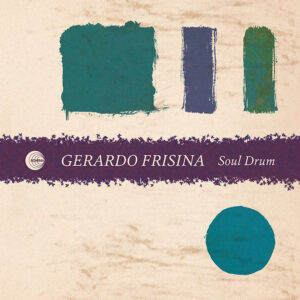 For a prolific artist as Gerardo Frisina, almost two years without a new release from him seems like an eternity: this brand new 12? EP entitled “Soul Drum” breaks the silence, giving us three new works composed by Gerardo, four if we consider the two versions of the title track.
This EP anticipates the full album already in the works, scheduled for release at the end of 2022.

Without losing his Latin trademark, Gerardo continues his research into hypnotic and pulsating rhythmic patterns in both acoustic and electronic form, which are now a fundamental stylistic element of his. As on his previous album “Moving Ahead”, the rhythmic style blends naturally with echoes of tribal voices, piano keys and wind instruments (trumpet, saxophone, flute), creating the “Joyful Sound” (title of the forthcoming album) that reverberates on the surface. With an artist as meticulous as Gerardo Frisina, it is to be expected that even the simplest beat has been deeply thought out and chosen from a potentially infinite sound palette, and this can be heard perfectly in the depth of sound of the four tracks of this release.

“Soul Drum” is dedicated to the loving memory of bassist Enzo Frassi, who contributed to this EP – along with ‘usual guests’ Fabrizio Bernasconi, Gendrickson Mena, Alfonso Deidda and Ernesto Lopez.

In loving memory of Enzo Frassi.