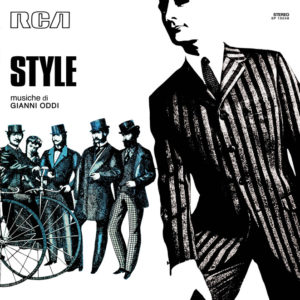 Like Richard Oliver’s “Dicky Oliver”, “Style” was an LP released on the RCA Italy catalogue.

“Style”, is an extremely rare album which was not conceived for sale but for synchronisation purpose only. This was quite common at those times, with many labels producing music for film, radio and tv and consequently pressing limited quantities of wax, which became rapidly collectible.

“Popoff” is a superb example of italian 70s Jazz Funk infused with a characteristic Progressive flavour, which was a trending genre at that time.

Among the eleven tracks of the LP “Notte a Bagdad” and “Kimono Pop” present wicked grooves and evocative atmospheres.

LP:
A1 Moda d'Estate
A2 Popoff
A3 Dedicato a Twiggy
A4 Notte a Bagdad
A5 Fine di un amore
A6 Torte in faccia
B1 Chanel n.7
B2 Una Giornata a Rio
B3 Kimono Pop
B4 Sfilata all'Hilton
B5 Omertà