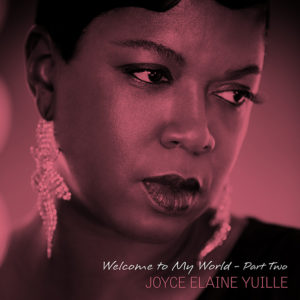 
With the release of this album all the tracks included in “Welcome to my World” are finally delivered on vinyl, with the addition of a re-arrangement of the track “Chaos” made by Gerardo Frisina. For anything that concerns the content of the whole release, we address you to the following original release notes.

Schema Records is proud to present the debut album of Joyce Elaine Yuille. After years of touring the world, the live singer hailing from New York has decided to focus on something different, a concrete, complex project: the album you’re holding in your hands. “When you perform you’re giving a lot of emotion, you’re giving a lot of energy, but you know once the concert is finished, I think is important that people can connect again with you, the music and what they had felt when they heard you live, because you know, the whole thing with me as a performer, is that I want to leave a good and lasting impression on people”.

“Welcome To My World” represents in fact a transition for Joyce: while for some musicians the recording studio is a safe haven, for others might represent an intimidating environment: with her debut album, Joyce embraced a new challenge, demonstrating she’s been able to convey her energy and talent out of the stage, perfectly recreating in the studio that “live” touching element that characterises her performance. As she explains, “When I’m recording I basically try to put myself in a scenario where I’m doing a live show and that helps me overcome the fear of being in the studio and making mistakes, because when you’re doing live, you just go, you’ve got to do it, you got to sing, you know, whatever is going on inside you, you just have to bring that out and I tried to now do the same thing, while I’m in the studio”.

As she powerfully sings throughout the album, there’s no fear that can’t be overcome. Her heartfelt singing welcomes us in her world, where complex and refined textures reveal her incredible qualities as an interpreter. Nuances of Jazz, Soul, Swing, Blues: “Welcome To My World” is Joyce’s gift to us – for the lucky ones who heard her singing live would be easy to recognise her timbre and heart – this album is the lasting and concrete proof of her talent and personality. In fact, Joyce wrote most of the songs on the album, delivering original compositions – thus unveiling her deep self through her songs – “I wrote a number of songs that kind of reflect my life situation, situations in my friends lives, world events, situations I see daily, maybe just walking down the streets”. Songs like “Late I Rise”, a hymn to persistence and positivity, or “Come With Me (The Ride Is Free)”, where she urges us to abandon our biases, to refuse prejudice and enjoy our time on earth, respecting the others and ourselves.

“A Time For Love Again”, written by Marco Bianchi is another example of how this album goes beyond music and expresses a powerful and strong positive message: in this song Joyce talks about love delusion and tells us how there’s no sense in wrapping ourselves in a shell, giving up to fear. We can all love again, reach out the others and feel joy again.

The repertoire includes some covers, among which stand out classics such as Marvin Gaye’s “It’s Madness” and Donny Hataway’s “Trying Times”. The album features the amazing Finnish sax player Timo Lassy with his whole band – musicians among the best Jazz players in the world, the only able to bring that little something, the groove and the subtlety needed to empower the dream and the vision of Joyce Elaine Yuille. As Joyce said, “these guys are wickedly fantastic, I keep telling everyone, don’t close your eyes on Finnish Jazz scene, because these guys are really kicking major asses!”.

LP:
A1 Chaos - Rearranged by G. Frisina
A2 Make Right
A3 Parallel World Moon Interlude
B1 It’s Madness
B2 Time to Love Again
B3 Come with Me - Slow version