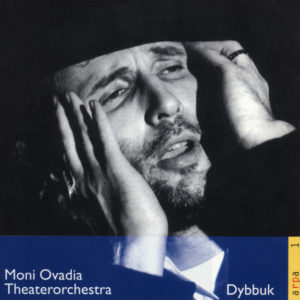 Nazism defeat and liberation from the extermination camp: “Dybbuk”, explains Moni Ovadia, is an album looking into those events falling now in their fiftieth anniversary, going back not only to the horror and to the opposition to this horror, but also to the Jewish world that from the extermination has been uprooted from Europe. When we talk about the defeat of nazism, we must not forget that nazism has anyhow succeded to attain most of its aims. Therefore we must continue to face an event representing a point of no-return in human history, an abdication of humanity from itself to which it’s not possible not to go back to.

From this event a cry reaches us and needs ethical response; “Es Brent”, for example, is a song written in 1938 imbued with the pathos and strengh of a profecy. It is the desperate cry of the ones who see the furious winds of destruction and prostraction coming closer and it spurs on Jews to revolt, to extinguish, if necessary with their own blood, the fire that soon would entangle the town: the profecy filfilled in the most atrociuos way. Also, the author of the song, Nardekai Gebirtig, has found death between the walls of the Warshaver ghetto in 1942.

“Es Brent” is not only a song regarding the paste: the flames are still all around us, and its very easy to light a fire, as we have seen in the events of ex Jugoslavia. From this point of view, “Dybbuk” is, in an ethical sense, a militant record: through the mashes of the defeat of nazism a lot has passed which has not been defeat yet, like racism, intollerance, war. “Dybbuk” would also contribute to be aware of ‘revisionism’ of extermination: there is nothing to ‘revise’. Which is the interest of ‘revisionism’ to neutralize the ethical deterrent’s strengh? Is it probably the interest to recommence? Memory is not a nostalgic glance at the past, it is the only possible path to freedom.

“Dybbuk” is the spirit of a dead one who died of violent, untimely and premature death, and comes to posses a living man to satisfy his thirst of life. Therefore this music, uprooted in one chop without having time to elaborate mourning, posesses the ones who are sensitive, who have an emotional project and life project. It’s a music that has always a function to develop but only on the basis that memory would be projected into the future and not in the ‘nostalgia’ of the past. This is a reason why this music is strict, powerfull and in a certain way ‘prophethical”, it invites to put one self in a non consumer way. Also musically our effort is to fight the minimazing of this repertory to kitsch, proposing traditional material in unpublished reading, able to write it again, choosing a widened organic, with twelve elements, takin distances from oleography.