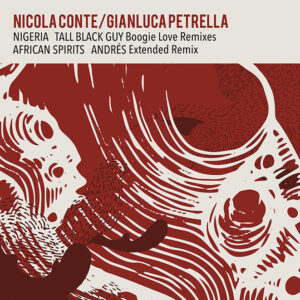 
The third release in the series of 12” EPs featuring reinterpretations of tracks from the album “People Need People” – the brilliant album by Nicola Conte and Gianluca Petrella released in 2021 – features the excellent collaboration of two American artists from the Detroit scene Tall Black Guy and Andrès.

Terrel Wallace AKA Tall Black Guy, raised on bread, Motown, jazz and early hip hop… he has become a standard-bearer of the current hip hop beat scene. With a steady stream of sample-filled productions and clever flips, he has won fans all over the world. His production skills are showcased in his own rendition of “Nigeria”, where he calls on Broken Keys AKA Tommy Sheridan DJ, producer, vocalist and multi-Instrumentalist from Cleveland, Ohio.

On side AA instead, DJ Andrés, now a revered figure of the Detroit scene praised by the eclectic Moodyman and Carl Graig among others, delivers a house version of “African Tribes” worthy of the most important dancefloors, in which he mixes soul-jazz parts with fragments of vocal samples and spoken words, all sublimated into a musical mixture with a strong deep house impact, with rhythm and mood typical of the black culture.

Originally conceived as a trilogy, this successful reworking series will eventually embrace a further fourth chapter including two new Fred P. interpretations of the tracks “African Spirits” and “Tribes”!

A1, A2 produced by Tall Black Guy and Broken Keys
Vocals on A1 by Broken Keys