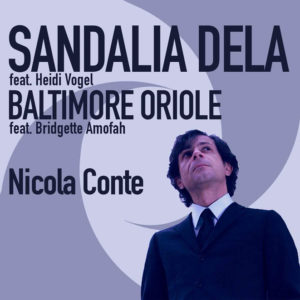 “Sandalia Dela” and “Baltimore Oriole” are classics, made famous through years by their several re-interpretations.

Nicola Conte takes his turn and gives new life to these songs with the help of British singers Heidi Vogel and Bridgette Amofah, supported by his amazing Combo.

On side A there’s a moving version of Luiz Claudio’s classic “Sandalia Dela”, made famous by Flora Purim interpretation. Heidi Vogel of The Cinematic Orchestra infuses new warmth and softness to the song with her seductive voice.