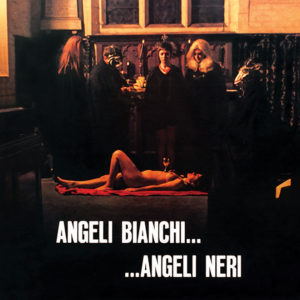 
“Angeli bianchi… angeli neri” is one of the best results of the collaboration between Piero Umiliani and director Luigi Scattini. Filmed in Brazil, “Angeli bianchi… angeli neri” (also known as “Witchcraft 70”) is one of Scattini’s most popular mondo films. However in an exagerated way, as was common at the time, the aim of the movie was to document the world of black magic, devil worshipping and pagan rituals. Through the years it has reached the status of “cult movie” along with “Mondo cane” (“A Dog’s World”) and “Africa addio”.

Without any doubt, some of its success is to be attributed to one of the most beautiful soundtracks composed by Umiliani. The soundtrack was recorded in part in Brazil, with local musicians and instruments, and in part in Rome, with the collaboration of the talents of Edda Dell’Orso, Nora Orlandi and Alessandro Alessandroni and his Cantori Moderni. The music reflects samba and bossa nova influences and emphasizes the composer’s ability in orchestrating the whole in a new and personal style. A special mention must go to the incredibile psychedelic “Streghe a convegno”, which seems to have stemmed from a Tropicalist masterpiece of the time, to “La foresta incantata” in which Orlandi gives a superb vocal interpretation, to the percussive “Macumba” (where it is Dell’Orso’s turn) and last to “Toccata e samba” which is a happy and daring mix between Bach and samba.

As Scattini himself states in an interview: “I firmly believe that this is one of the most beautiful soundtracks composed by Piero. It is a mix of bossa, samba and ambient music, not aimed at underlying or accompanying the scenes, at times crude and violent, but at arising in the spectator the very same emotions I had experienced while directing”. It will be the same for you also…


LP:
A1 Sweet Revelation
A2 Saudade
A3 Saudade (orchestra only)
A4 Folk Time
A5 The City Life
A6 Carnaval (orchestra only)
A7 Streghe A Convegno
B1 Magical Children
B2 Magical Moonlight
B3 Macumba
B4 La Foresta Incantata
B5 Now I’m On My Own
B6 Toccata E Samba
B7 Iniziazione Di Una Giovane Strega (orchestra only)