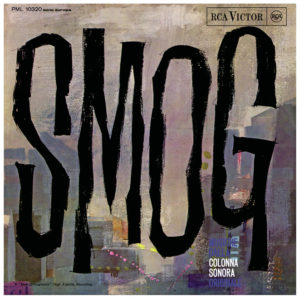 
24 hours in the life of an Italian lawyer in a livid and exhausting Los Angeles. His encounters with his compatriots, the raising consciousness about a society obsessed with the myth of success. More than the action and characters, here are the anguish and troubles of the main character that matter. One of the best scores signed by Piero Umiliani, a unique soundtrack settled in an immense Los Angeles as it has never been shown in an American movie.

Piero Umiliani was contacted in 1958 by Mario Monicelli to compose the soundtrack of the movie “I Soliti Ignoti” (Big Deal on Madonna Street). It was not the usual kind of soundtrack, but the very first Italian soundtrack entirely made of Jazz pieces. The Movie received a nomination at the Academy Award and even if it did not succeed in winning the prize (which was awarded to “Mon Oncle” by Jacques Tati) it launched Umiliani’s career and started the prolific era of movie scores in Italy. Then in 1962 was released Smog, featuring Chet Baker and the amazing vocalist Helen Merrill. A soundtrack not to miss.

LP:
A1 Smog
A2 Neapolitan Phantasy
A3 Dawn
A4 Hollywood Tonight
A5 California In The Summer
A6 Thinkin' Blues
B1 Smog
B2 Tension
B3 Tops
B4 Alone In A Crowd
B5 Bowling
B6 Twilight in Los Angeles