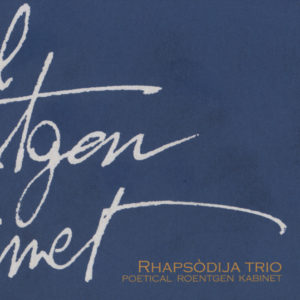 The music of Rhapsódija Trio is to be intended as an environmental music, in the best possible sense: music that does not consume useless energy; a music which, as opposed to that, produces more energy than the one it burns out. An indication that certainly derives from the band itself: an acoustic trio, with a balanced sound, that does not necessitate any amplifier «to sound right». Their use of technology seems ever moderate. Without a doubt, the idea of a favourable equilibrium of energy most of all comes from their qualities of composing and performing: it is gripping, intense, often difficult to play yet without apparent effort; like many types of music, popular and Europeans, as well as from the near East. Sometimes one can have the sensation that the Rhapsódija play like gipsies who read Bartók critic reviews to pop-folk music and after having approved, by lifting their shoulders, they put themselves down to reinventing it (perhaps, reinventing even Bartók).

Nevertheless, they now title their new album: “Poetical Roentgen Kabinet”, and the image they chose to me seems contradicting the one that has always come out with their music: what is devouring more energy than an old X-Rays machine? What is more ecologically «polluting»? Well that is the point; the image evokes a different epoch from ours, far in the past, when the machinery invented by Roentgen was «modern» and clean, the quintessence of cleanness: so not physical to allow us seeing through bodies. That was the era when radioactivity was considered beneficial, and energy seemed eternally available. So then: taking back to life, like dancing skeletons, the images of those old X-ray scans, the Rhapsódija Trio bond a bridge between a romanticized, idealized («poetic») past, and our present starving of energy, suggesting a very human solution. As ever, a nostalgic view is a way to give a meaning to the present as well as to envisage the future. After all, that is what Rhapsódija have always done: inventing a music of the future (an upsetting future, all but peaceful), that yet seems of the past. They do it extremely well.