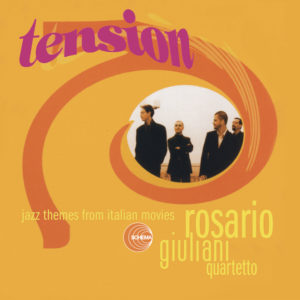 I met Rosario Giuliani some years ago (he happened to be part of an orchestra in one of my recording sessions); after hearing him playing I nicknamed him ‘thousand-notes boy’. I realized I had met a young sax virtuoso, perfectly mastering a refined and exceptionable technique: an authentic improvisator. And you know, improvisation is the real essence of jazz. Capable of such personal interpretations (he seems to ‘live’ each theme note by note, interval after interval) whose rigour and coherence I’m pleased to define almost classical. In this CD Rosario succeeds in giving the impression of a live stage, thus shortening distances between players an listeners, and therefore, heating the cold atmosphere usually pervading recording rooms. He has got sufficient charisma to become the catalyst agent of the group, gathering four extraordinary players: Pietro Lussu on piano and keyboards, Fabrizio Bosso on trumpet, Joseph Lepore on double-bass and Lorenzo Tucci on drums.

Everything is plunged in a magic perception of time, non technical, where notes fly around the executed themes while different signals and sensations follow one another as if they were waving. Giuliani performs such long solos neither schematic nor repetitive. He has got a boundless fantasy and expresses himself playing notes which amplify the basic chords. His music is direct, harsh, delicate, introspective; his phrasing produces somewhere ‘note storms’ (Tension – Una bella grinta – Emanuelle – Gassman Blues take 2), elsewhere mysterious and cool atmospheres (notice the pure lyricism of his solos in “Dreaming of the past” and “Il sorpasso”). His style is an exhausting outline of Parker’s, Coltrane’s and sometimes Ornette Coleman’s musical experiences, filtered by his personal “search for freedom”. The result is an harmonically rich music, absolutely charming with its evolved melodies and swing. Each of the other great components of the quintet do his very best in some takes of teh album. I’d like to remark Lussu’s execution of “Tension”, “Gassman Blues”, “Dreaming of the past”, Fabrizio Bosso’s of “Una bella grinta”, Lepore’s of “Relaxing with Chet” – Gassman Blues take 2 – Amore, amore and Tucci’s of Tension – Emanuelle – Gassman Blues take 2. Finally, Rosario si really a “thousand notes boy” and each of those thousands notes is the right one.