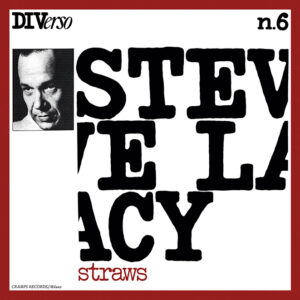 I can’t explain my work in words. For me, the music explains itself in sounds.
The saxophone is a machine like another, and it is only by breathing life into it, that it becomes of human interest. When I began to explore the possibilities in the soprano sax in 1950, it was in almost total disuse. By now, due largely to the example and inspiration of John Coltrane, but also somewhat to my own efforts, this instrument is in full flower.
Performance and composition are the two principal sides of my musical activities. Naturally, there is a constant feedback from one to the other. However, a musician is a sort of «medium», and quite often, the work is done in a state of trance, and only afterwards, can one realise what has happened, especially in a music which deals in large doses of improvisation.
This record contains two solo pieces, two more with celeste accompaniment, as well as two collages with background tapes.

Pinochle is a game of cards, enjoyed by the great pianist, Art Tatum. One of the most important «players» in jazz, Tatum had an enormous influence on me, especially as virtuoso, self-contained, soloist. In the course of this interpretation, I quote from a standard tune that Tatum used to like to play («Get happy» by Vincent Youmans).

Straws was written when Igor Stravinsky died, but has not been played ‘til now. This version uses a single strand of the melody, superimposed on a tape I made of three clarinet players and two saxophonists (myself included), trying out reeds, in a room at the Vandoren Reed factory in Paris. The piece is a solemn blues with joyou’s interferences.

Hemline is a recent tune, dedicated to Janis Joplin, the rock star, who was a tragic swinger, and one of the more interesting of the «new style» ladies on the scene in the late 60’s.

Bound to Irene Aebi, my «old» lady, whose voice I prefer to all others. This song (written in 1971), begins as a ballad, then turns blue (finally becoming grey and wise, at the and.

Feline (portrait of Marilyn Monroe). I wanted to capture the allure of the ordinary girl within the goddess, and the solitary space surrounding a «star». The celeste was discovered in the studio. The pussy-cat improvisation was sipped through the saxophone, as if it were a straw.

The rise is built upon a tape recording of sounds from the construction of the, still unfinished, centre culturel de Beaubourg, in Paris. Five layers of soprano sax are added on, all of them, improvised. A sort of « poeme sonore », it is dedicated to my good friend, Brion Gysin, the many-sided artist, who is himself, a «rising star».

LP:
A1 Pinochle
A2 Straws
A3 Hemline
A4 Bound
B1 Feline
B2 The Rise