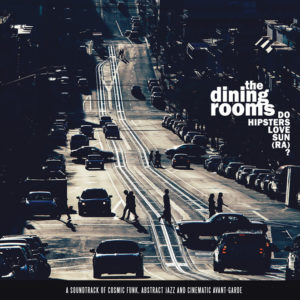 “Do Hipsters Love Sun (Ra)?” – A title that condenses the almost conceptual nature of this album: on one hand, a tribute to Sun Ra, one of the most profound and revolutionary characters in the history of music, capable of giving a new meaning to the word cosmic, a messenger who came from outer space to bring new spirituality and vision. On the other hand the word hipster – to this day a synonym of naught and superficiality, but with deep socio-political and aesthetical roots: Jack Kerouac, for example, described hipsters as “[people] rising and roaming America, bumming and hitchhiking everywhere [as] characters of a special spirituality”. Hipsters were innovators in the first place, cultural explorers driven by the desire for novelty and experimentation.

All of this finds its place in “Do Hipsters Love Sun (Ra)?”: a soundtrack that condenses cosmic elements, the desire to explore and discover and the ability to imagine and dream. Existentialism, experimentation, spirituality: here’s the homage to Sun Ra, an influence more conceptual than musical on this record.

Abstract jazz, cosmic funk, instrumental hip-hop: “Do Hipsters Love Sun (Ra)?” contains all the features and influences typical of The Dining Rooms’ sound, but also a strong cinematic element that sticks its roots in the world of library music and Italian motion picture soundtracks. The reinterpretation of those atmospheres is the other theme of the album, an undercurrent able to instill those legendary soundtracks charm into this record tracks.

Here is an (almost) conceptual album: it’s about radiance, irony, the meaning of life referred to movement and especially to our floating in space. A soundtrack without images, among real and imaginary planets, that meets Sergio Leone on an asteroid and gives us an appointment on Mars, grazes hipsters and beatniks on the devil’s moon – because, as Herman Poole Blount wisely said, “Space is the place”.

LP:
A1 Space is the place
A2 Do hipsters love Sun (Ra)?
A3 Appuntamento su Marte
A4 Interstellar
A5 Once were warriors
B1 Devil’s Moon
B2 Saturno
B3 Sergio Leone asteroid
B4 Instrumental hip hop is back
B5 Light time tales