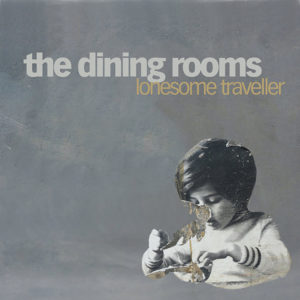 Three years after “Ink”, The Dining Rooms release their sixth studio album “Lonesome Traveller”. “Cinematic music” and “songwriting” (also developed in the Sem’bro Project released by Summer Dawn in 2010) are the main features of the Milanese duo work.

The meeting with the London based singer Jake Reid, and his undeniable vocal characteristics, played an important role in the writing and production of this album. Almost marked by fate, the meeting with Jake was fortuitous and immediately deep. Stefano and Cesare were looking for singers for their new album, when Stefano received an e-mail from Jake congratulating him for their previous productions and asking for any features in the near future. Stefano listened to the tracks performed by Jake and decided to play them to Cesare; an immediate feeling has dawned shortly between Jake’s soulful and vibrant voice and The Dining Rooms musical atmospheres. Jake ‘s approach to the album has been very enthusiastic and dynamic, he performed songs already written and wrote new ones inspired by the new collaboration. The result is an unusual album for the Dining Rooms style: for the first time there is a prevailing voice that defines the project stylistically.

“Lonesome Traveller” is an elaborate record, it is especiallythe crossing of the traditional song format by means of complex melodic textures and a minimalist approach to the vocals, which is interwined with the instrumental parts in a kind of a psycho-jazz, soul mantra. The whole is rhythmic and expansive, harmony and nocturnal melancholy, abstraction and melody, an hypothetical meeting point among the vocal albums of Brian Eno, “Another Green World”, and his more ambient productions, “Music for airports” and “Music for films”. “Lonesome Traveller” is also a concept album about the journey, inspired by a series of writings by Jack Kerouac (“Lonesome Traveller”, released in 1960).

The song titles and the development of the tracklist are designed like chapters of a book or scenes from a movie, a sort of emotional narrative that becomes the underlying theme of the album and blends, seamlessly, literary, musical and cinematic references, from Don DeLillo (“Running Dog”) to Woody Allen (“Interiors”); from Can (“Fading Gradually”) to half-breed jazz (“Io cammino ma…”) passing through Erik Satie meeting Aphex Twin and Boards Of Canada (“We are the music makers”, “We are the Dreamers”, “Hotel rooms”).

The traveller is lead by “existential” questionings and embarks on a journey that is primarily research based, with self-discovery as the central focus. The journey, an unexplored horizon, becomes a metaphor for life: the conquest of man’s own internal world evoked in this album by the dialectic between voice and instruments. This highlights the gap between stability and instability, speed and slowness and between established values and absolute freedom. It is the driving force of human will, to look ahead to the future and the unknown as a new challenge. The journey therefore contains a substantial polarity between loyalty to man’s own roots and the challenge of research, between the promise of the conquest and the risk of loss, between the hope of return and surrender to the unknown. The significance of the journey is key to this album’s structure and merit…