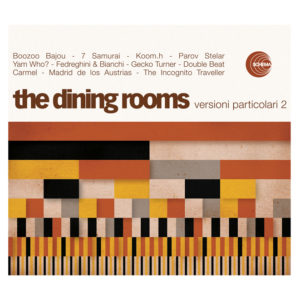 The two unreleased tracks add further deepness to the producing standards of our very own The Dining Rooms. “Ocean” is a spiritual ballad almost entirely instrumental, which fuses jazz rhythms with blues guitars. Whereas “White riot” is an up-tempo, nervous funk tune dedicated to all those who are ready to stand up for their ideals. The idea of the track came when Stefano Ghittoni found a sample of some students chanting against the police during the Berkeley fights in the mid-sixties. In the days when the track was produced The Dining Rooms were working to a new track and decided to use that sample in it and to title the song “White Riot” (paying inspiration and respect to the homonymous song by The Clash, dedicated to the Notting Hill Carnival riots in 1976).

On the remix front, instead, the producers called in to rework the songs from “E.i.A.S.” create an eclectic and homogeneous coolness, ranging from dancing jazz to broken breakbeat, from 4/4 mid-tempos to funk. The Boozoo Bajou remix of “Afrolicious”: the German duo took a lot of sounds from the original but in a dubby way and the result is electronically funky with a reggae atmosphere and a western steel guitar. Gecko Turner come from Spain with their P-funk interpretation of “Milano Calibro 9”, courtesy of Lovemonk Records, while up-tempo cinematic Koom.h delivers an intriguing and stylish remix of the title track “Experiments in Ambient Soul”. The two vocal-jazz tracks in the album, written with Don Freeman, are re-shaped to new form by the work of two amongst nowadays trendiest producers: Yam Who? (“The World she Made”) and Parov Stelar (“Destination Moon”). Both tracks were originally more ambient, whereas here they get restyled by an intriguing production certainly aimed at the dancefloor. In the same dancefloor perspective surely feature the house-funky “Milano Calibro 9” by Madrid de Los Austrias and the mid-tempo breakbeat house “Diamonds & Comforts” produced by Double Beat. (Soul hip hop goes 4/4.) Not to forget the broken-housy breakbeat of Carmel reworking “Afrolicious”. Impressions of dancing jazz instead are given to “No Problem” from the forward thinking, with an old-school attitude, 7 Samurai and “Thin ice” is by our champions Bianchi & Fedreghini. An exclusive and unreleased re-interpretation of “Forever’s Not” by a secret combo, going by the name of “The incognito traveller”, terminates the album.

In conclusion, another tile of style and class in the mosaic of our cinematic duo. By the way, The Dining Rooms are already working to a new album that will come out in early 2007.

All tracks published by Edizioni Ishtar
Mastered by Giovanni Versari at Nautilus, Milan
Produced by The Dining Rooms (Stefano Ghittoni and Cesare Malfatti)

Versioni Particolari 2 is a collection of tracks previously released only on vinyl 12" SCEP 390, SCEP 400, SCEP 370 and SCEP 414
The original versions appear on the "Experiments in Ambient Soul" album SCCD 389