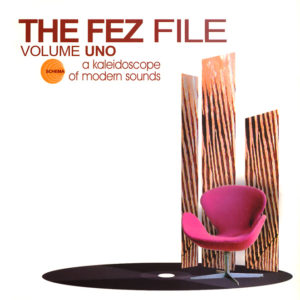 
Here it is the ultimate soundtrack for young moderns.

Nicola Conte and Filippo Bratta, the Gold Fingers behind the fez turtables, listed some of their favourite tunes in order to create a sophisticated soundscape. From future lounge classics to spy jazz moods the Fez File present an attitude more than just a selection of dance floor favourites. Compost record Les Gammas gave a beautiful unreleased Brazilian track the same did Thievery Corporation. The Hip Sheik from Karminsky is simply a theme for any lounge set. There are some less known tunes which as been rediscovered from the duo: Lisa Carbon Trio among the others. The album features also songs from: Ursula 1000 – Dauerfish – Cinematic Orchestra – Stereo Action Unlimited – Bobby Hughes Exp. – Cosmo Vitelli – Boozoo Bajou – plus a psychedelic bossa from the London trio Les Hommes wich anticipate their debut EP for Schema records.

The Fez file also feature for the first time on cd “Arabesque” by Nicola Conte.