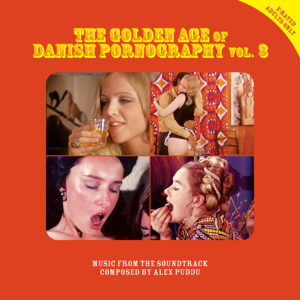 Alex Puddu has done it again!

The guy behind this project is Jan Schmidt, a close friend of Alex with whom he shares his taste for Italian movies from the ’60s and ’70s and a love for their unparalleled soundtracks. When Jan decided to produce this DVD series, he realised that the original audio was lost forever, and immediately thought of involving Alex in writing a new soundtrack. “The Golden Age of Danish Pornography” was born.

Even this time, Alex is doing (almost) everything by himself – writing, arranging, producing and performing with a little help from a few trusty friends. The recipe is rich and tasty, likely to please the most refined palates. Disco funk, tribal and exotic percussions, smooth Memphis soul riffs, fuzzy guitars, interstellar synths, electric sitar, wild vocals, groovy saxophones and trumpets, all of this and much more can be found in this incredible record!