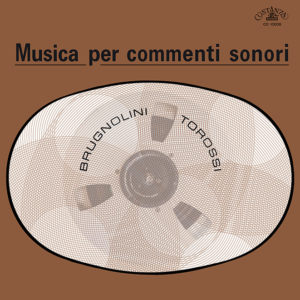 
“Musica per commenti sonori” is a cult series within the diverse world of Italian library music. In the late sixties and seventies, the small record label Costanza Records has published several releases precisely focusing on ‘background music’, including works of great composers such as Peppino De Luca, Roberto Pregadio, Franco Micalizzi, Vito Thomas, Giancarlo Thomas Puccio Roelens, Riccardo Luciani, and by the protagonists of this long-time due reissue: Sandro Brugnolini and Stefano Torossi.

The two musicians, who had also worked together on the masterpiece “Feelings” (1974), have often collaborated and delivered some of the best Italian library music of all time. “Musica per commenti sonori” is certainly one of the most interesting. On the two equally split sides of this LP, the first for Torossi and the second for Brugnolini (but it seems that this partition was exclusively dictated by legal demands), there are twelve amazing tracks that will excite lovers of the wildest funk, producers in search of rare breaks, and those with a penchant for the psycho-beat atmospheres of the sixties.

Among the most heated tracks featured on Torossi’s side, we can’t pass over the amazing “Sweet-Beat”, “Interrupted” (perhaps the best track of the album) and “Repetition” while “Polyphony”, “Motuproprio” and the closing track “Flyer” shine on Brugnolini’s. Virtually impossible to find, even at astonishing prices, this reissue puts back into the market one of the best examples of ‘The Italian Art of Library Music’: a genre worldwide envied and collected.

LP:
A1 Sweet-Beat
A2 Interrupted
A3 Repetition
A4 Starter
A5 Makkaresh
A6 Fast Train
B1 Motuproprio
B2 Free Stuff
B3 Wawa
B4 Polyphony
B5 Grace
B6 Flyer